Tekahionwake incorporated her Mohawk heritage into her performances 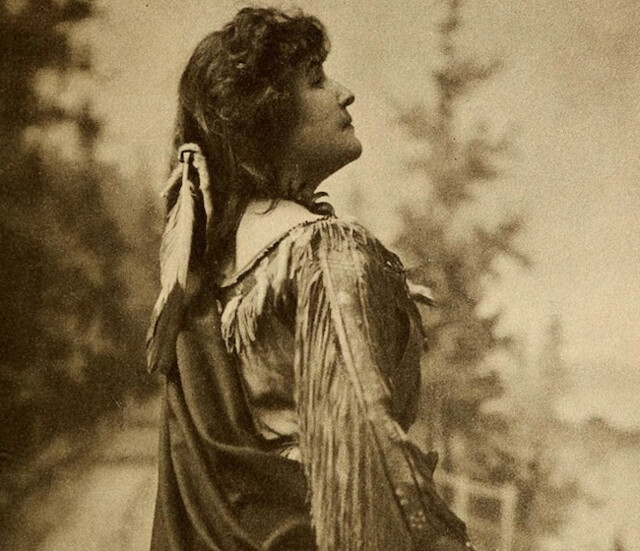 Photo: Contributed
A photo of Pauline Johnson, taken shortly before her death in 1913, courtesy of Wikimedia Commons (public domain).

Vernon has long been home to a plethora of talented wordsmiths, which a humble binder in the Vernon Archives titled “Writers” reveals.

The binder is full of information about several of Vernon’s many authors and poets, arranged alphabetically from Thomas Andrews (author of Type: Writer) to Mark Zuehlke (author of Scoundrels, Dreamers, & Second Sons).

The Vernon Museum is even lucky enough to have its own award-winning author and poet on staff, Laisha Rosnau.

In addition to these gifted locals, Vernon has also played host to several traveling writers over the years. One that caused a particular stir during her turn-of-the-century visit to the city was Tekahionwake (Pauline Johnson).

Tekahionwake, born in 1861, was a member of the Six Nations of the Grand River, and daughter of Chief Onwanonsyshon (G. H. M. Johnson) and Emily Howells.

Tekahionwake began writing poetry in her mid-teens, after a childhood of poor health largely confined her to indoor pursuits like reading.

Sometime after 1884, following the death of her father, Tekahionwake began a career as a public orator and embarked on a series of speaking tours in Canada, the United States and England. Her poems were largely patriotic in nature, but she also incorporated elements of Mohawk culture into her performances.

Tekahionwake visited Vernon in 1907, where she offered a poetry recitation in the second-floor hall of the W. F. Cameron general store.

By then, she had published two volumes of poems, “The White Wampum” (1894) and “Canadian Born” (1903), and the crowd was large and appreciative.

When she passed away in 1913, the Vernon News dedicated several pages to describing Tekahionwake’s life and many cultural contributions.