A 'new era' for Armstrong

A groundbreaking ceremony was held Thursday for what Mayor Chris Pieper called "a new era" for Armstrong.

"We look forward to our new city hall as we say a fond farewell to the old one," he said.

The current building, directly across Bridge Street, is 105 years ago and has many stories to tell.

It cost $3,075 to build, once held jail cells that still bear the scratched markings of those who served time in them, and opened in the midst of the First World War.

Armstrong also shared the council chambers with neighbouring Spallumcheen for many years, and the two would alternate its use for meetings.

The new building will reflect the wood-first initiative Armstrong has followed with construction of its arena, Spirit Square and other projects, said Pieper.

The $4.1-million project will be about 6,500 square feet, with a walk-out basement of roughly the same size for future expansion.

It will include a much larger, 70-seat council chamber, two conference rooms and a second floor classroom.

AnR Construction is the lead contractor on the job.

It will allow better storage for records management as well as an emergency operations centre on the lower floor, as needed.

The site previously housed the Agricultural Hall Fair Building built in 1906, later used as a recreation hall and gym that Pieper himself used in his youth.

The lot also was home to two schools over the years and more recently was used by the Boys and Girls Club.

Pieper noted the contractor has been asked to salvage the original vault door in the old city hall and incorporate it into the new building.

Sarah Heward, the longest-serving employee in the city office, said the old building isn't home to any ghosts – that she's aware off. But it does have its quirks.

The floors are crooked, the ceiling leaks, and "every time a train goes by, it feels like there's an earthquake."

One time, there really was an earthquake and staff thought nothing of it because they were so used to the shaking. 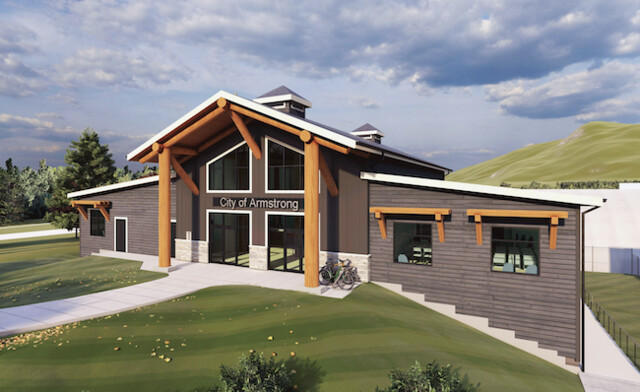