Vernon man in hospital after becoming paralyzed from waist down 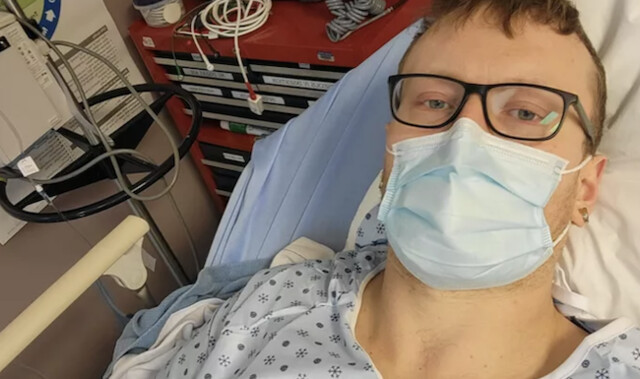 The partner of a Vernon man who came down with a mystery paralysis says doctors are narrowing in on what may have caused it.

"We're pretty sure we know what it is now," says Shaylyn Wasylik.

After having a CT scan, doctors suspect the cause of John Carmichael's paralysis may be transverse myelitis, a neurological disorder that can cause inflammation on the spinal cord.

A Vernon man is in need of help after coming down with a mystery ailment that has left him paralyzed from the waist down.

"I've recently had to stop working because of back pain that seemingly came from nowhere," says John Carmichael who posted about the situation on the Vernon & Area Community Forum Facebook page.

"Two days after, my legs started to go numb and two days following that, I woke up in the morning and I am completely paralyzed from the belly button down.

"It obviously came as a complete surprise and caught everyone off guard," Carmichael wrote on his Facebook page.

The father of three young children has been sent to Vancouver General Hospital, where he is being treated by neurological specialists.

"The doctors are still trying to figure out what is wrong. I've undergone multiple tests to find out, and I am just waiting on results. I've started a steroid treatment to see if that will improve things," Carmichael said on a GoFundMe page set up to help him cover expenses.

On Monday afternoon, Carmichael posted: "This afternoon, I went for a testicular ultrasound just to rule out cancer. I was also scheduled for a full CT scan, but that got postponed, probably for a more urgent person."