RCMP are investigating a fire that destroyed a home in Coldstream Friday night.

Mounties were called just before 7 p.m. on Jan. 14 to assist the Coldstream Fire Department with a fire on Hawthorne Place.

Police evacuated neighbouring residences as firefighters fought to get the blaze under control and prevent its spread to neighbouring homes. The residence was completely destroyed as a result of the fire.

“A full and comprehensive investigation into the incident is being undertaken,” states Const. Chris Terleski, Media Relations Officer for the Vernon North Okanagan RCMP.

“The investigation is in the preliminary stages and the cause of the fire remains undetermined, however, at this time we are treating the fire as suspicious. The residence has been secured to allow officers to conduct their investigation and for the examination and collection of any physical evidence at the scene.”

Police are asking anyone who witnessed any suspicious activity prior to the fire or has information that may assist the investigation, to please contact the Vernon North Okanagan RCMP at (250) 545-7171.

A major structure fire has been seen on Friday evening above Buchanan Road in Coldstream, with what looks to be a large home completely engulfed in flames.

Gary Criss was out for a drive before 7 p.m. when he was told that a house was on fire by a volunteer fireman coming into the area. He travelled up the hill to see a massive home nearly gone burning brightly.

"There's nothing left. It's probably a big, you know, three to five thousand square foot house that's been burnt right to the ground," he explained.

Fire crews arrived on scene to tackle the flames.

"It looked pretty nasty. Hopefully nobody got hurt," he added.

Castanet has reached out to the fire department for more information. 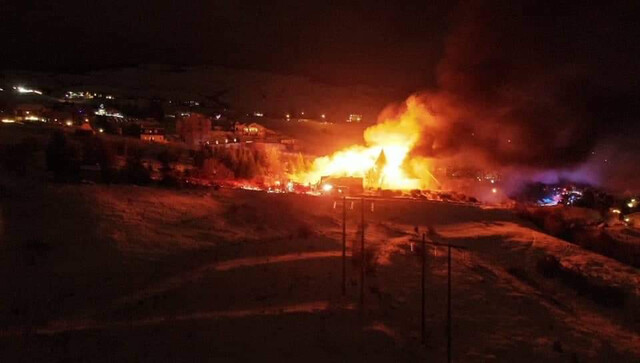