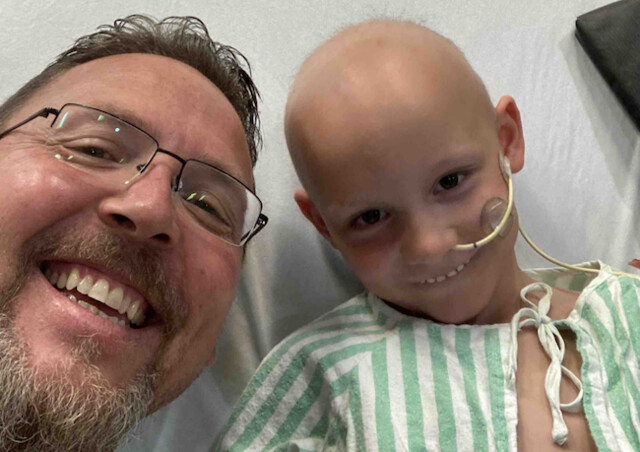 Tony Annecchini is feeling much better about life today than he was was on Thursday.

The Vernon father was distraught when he was told non-vaccinated people would no longer by allowed into Ronald McDonald House in Vancouver – including his six-year-old son, Chase, who has been battling neuroblastoma since he was four.

Earlier this week, parents of sick kids were told they and children over five can't stay at the charitable home for families visiting BC Children's Hospital unless they are fully vaccinated against COVID.

Neither Tony nor Chase are vaccinated, and Tony was concerned about the impact the decree would have on his son.

Initially, the news sent Tony into a bit of panic, but he has since spoken with RMHBC and learned they are providing options for parents and children.

Tony's biggest concern was that Chase can't be vaccinated because he is undergoing cancer treatment. The father also has his own concerns about getting the jab.

But, after Tony spoke with an official at RMH, he learned an exemption for Chase is possible – and he is actively pursuing that option.

Kelowna resident Brian Blakely says his son's doctor provided an exemption for his five-year-old boy, Andrew, who is staying at RMH while battling leukemia.

“I understand I cannot stay there because I am not vaccinated, and that's fine, and if I can get an exemption for my son, then I am very comfortable with what they are doing,” Tony said Friday.

Chase's mom is fully vaccinated and can accompany Chase.

Tony felt the way RMH delivered the news about the policy could have been handled better. He said he knows of several parents across B.C. who were upset by the news.

Now that he has more information, he's much calmer about the situation. He even went so far as to post an apology to RMH on Facebook for a heated statement made earlier.

“Ronald McDonald House is amazing. They have been amazing, but I believe it was the delivery that was just horrible. It sent me in a panic as well as a lot of people I talked to.”

Tony says RMH is looking to secure other accommodations for parents, and he has also received offers of a place to stay from family and friends in the Lower Mainland.

“I will find something alternative until this all calms down,” he said. “My concern now is, will the hospital do this? Will the hospital say I cannot go into the hospital? Who's next? This weighs on my shoulders.”

A GoFundMe has been set up to support the family.