Anti-abortion sign north of Vernon target of vandals yet again 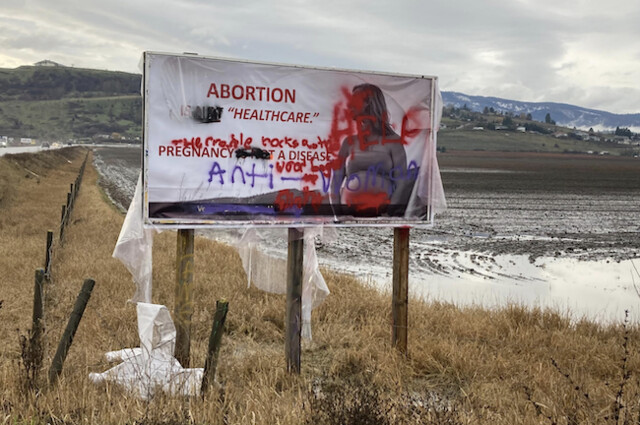 A pro-life billboard at the north end of Vernon has been vandalized – again.

Various versions of the sign along Highway 97 at the northern end of Swan Lake, between the intersection with Highway 97A and Old Kamloops Road, have been the target of vandals in the past.

Pro-life signs were damaged in April and August of 2020.

In the most recent act of vandalism, the culprits used black, blue and red paint to deface the billboard, which said "Abortion is not healthcare, pregnancy is not a disease."

The billboard was covered in a sheet of plastic to deter paint being splattered on the sign as in past, but the plastic was ripped down.

"Vandalism has been used regularly by pro-abortion advocates for many years as a way to try and silence the pro-life message," said Pro-Life Vernon director Marlon Bartram. "It just doesn't surprise us anymore, and it shouldn't. Those with a blatant disregard for the very lives of pre-born human beings will naturally care little for the property of born people."

Bartram says the society will try cleaning up the sign and replace it, if necessary.

“Tips as to who may be responsible for the vandalism have already come into the office, and a police report will be made,” said Bartram.