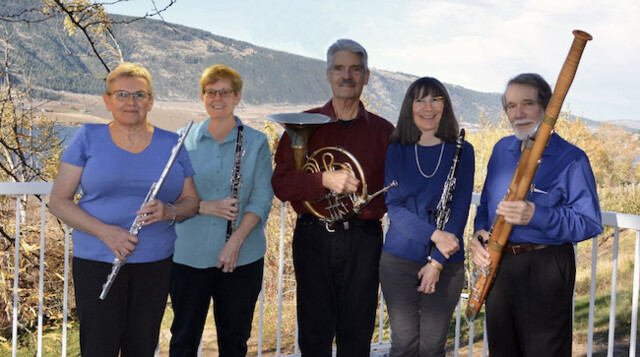 The sound of music will be echoing through the Vernon Museum.

The Music in the Museum series is back with a live holiday concert Dec. 2.

“The museum launched its Music in the Museum series with a well-attended holiday concert in December 2019 before – well, we all know what happened to live events beginning in March 2020,” said Amy Timleck, programs and marketing co-ordinator.

“Fittingly, we are reviving the Music in the Museum series with a woodwind quintet, which is what played to a full house in December 2019.”

The Wind Jammers Quintet will play a variety of both woodwind quintet classics, and holiday music in classical and contemporary arrangements.

“Quintet music started in the late eighteenth century, coming out of the French Revolution,” Page said. “It was composed specifically as ‘music for the populace.’”

Page will be joined by musicians Karen Gibbons on oboe, Edmund House on French horn, Mary Norby on clarinet and Janet Watson on flute. The group will play popular and familiar holiday classics, as well as special pieces composed specifically for woodwind quintets.

As well as the Wind Jammers, the musicians have been involved in diverse musical ventures with such groups as Oko Baroquo Early Music, Alleluia Hand Bells, Opera Kelowna and the Okanagan Symphony.

“It’s an honour to have such accomplished musicians revive our series in Vernon,” said Timleck. “It will be an opportunity for those who are curious about experiencing music styles they might not have before – like a wind quintet – and to listen in inspired and informal setting.”

COVID protocols - including vaccine passports - will be in place for the all-ages concert.

Tickets are $15 for adults, $10 for seniors/children/members and can be purchased online starting Nov. 18.