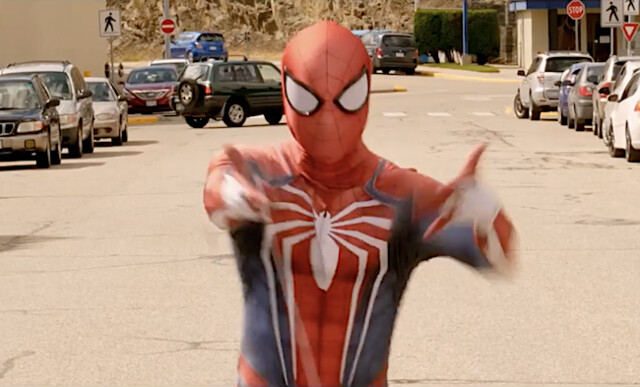 Sometimes, you don’t need to wear a costume to be a superhero.

Created and directed by Mitchell Vanlerberg, who shoots the Hello Okanagan video feature on Castanet every weekend, the film had its premiere delayed for more than a year by the COVID-19 pandemic.

Based on the Marvel Comics character Spider-Man, it will be shown in a one-night-only screening at the Towne Theatre on Nov. 17, with showtimes at 5:30, 7, and 8:30 p.m.

The film was shot in Vernon in 2019 and is finally being released on the big screen after delays due to COVID restrictions in theatres.

Vanlerberg made the film as a love letter to the creators of Spider-Man, Stan Lee and Steve Ditko, who passed away a few years ago. The core of the film is about responsibility and always trying to do the right thing despite the odds.

Those values are reciprocated in real-life by trying to help out the community, as mental health is a timely issue.

The film follows Peter Parker after four years of being Spider-Man, wanting nothing more than to get rid of his powers and just be normal again.

However, residents of Manhattan mysteriously receive similar spider powers, and Peter has a choice to finally get rid of his responsibility. But does everyone understand that with greater power must also come great responsibility?