Object not an explosive

Vernon RCMP Spokesperson Const. Chris Terleski says that members of the RCMP Explosive Disposal Unit confirmed the suspicious device was not an explosive.

Residents have since returned to their homes and the area is once again open for public access.

“The person discovering the device did the right thing by notifying police immediately,” says Terleski.

“Reports of any potential explosive devices must be taken seriously and all necessary precautions must be taken to ensure the safety of the public. We are very fortunate to have experts available who are trained to provide guidance and assist in dealing with suspicious devices. Thankfully, the device determined not to be an explosive and we want to express our appreciation to residents and the public for their patience and understanding as we worked to safely resolve the situation.”

The RCMP Explosive Disposal Unit has apparently now removed the suspicious device from a residence on 24th Avenue in Vernon.

The RCMP Explosive Disposal Unit has arrived on scene at the site of a bomb scare on 24th Avenue in Vernon.

A neighbour tells Castanet the bomb squad arrived about 4:30 p.m. to deal with a suspicious device said to resemble a pressure cooker with wires and batteries attached.

They apparently have deployed a remotely operated vehicle to assess the situation.

The RCMP Explosive Disposal Unit has yet to arrive at the scene of a bomb scare in Vernon.

The so-called bomb squad is based out of the Lower Mainland.

A work crew on the premises at 3710 24th Ave. identified a suspicious device Thursday morning described as looking like a pressure cooker with wires coming out of it, attached to batteries.

The scene is said by neighbours to be the site of frequent drug activity and is described as a "flophouse" that sells drugs to Vernon's street entrenched population.

Police continue to have the area cordoned off, and residents closest to the unit have been evacuated.

The RCMP's Explosive Disposal Unit has been called in to an unfolding incident on 24th Avenue in Vernon.

A suspicious device was located inside a unit on the 3700 block. Residents of the neighbourhood identified the address as 3710 24th Ave.

"Frontline officers evacuated nearby residences and established a containment area around the location to ensure the safety of the public," says Terleski.

"Investigators engaged the RCMP Explosive Disposal Unit, and the area will remain cordoned off until the EDU team arrives to assess the situation and deal with the device appropriately."

The public is asked to stay away from the area as police work to safely resolve the situation. 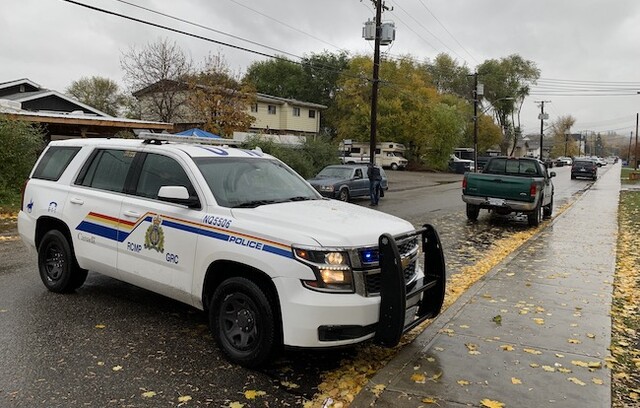 Police have converged on 24th Avenue in Vernon after the discovery of a "suspicious device."

Their attention is focused on a unit at 3710 24th Ave., where an object resembling a pressure cooker was found with wires coming out of it.

It's not clear if homes in the vicinity have been evacuated, but few residents were seen outside.

Police are letting residents out of the area, but not allowing people in.

It's not yet known if the RCMP explosives unit has been called in, but Castanet has reached out to Vernon RCMP for more information as the incident unfolds.

The address in question appears to be a multi-unit four-plex or eight-plex.

At least four police units are stationed outside the address, with more blocking traffic about 500 metres down the street.

Several residents of the area said it has become notorious for drug dealing, homelessness and criminal activity.

One neighbour alleged ongoing drug activity at the address police are focusing on.

"That's where all the crackheads are getting their drugs," said the man, "and they getting more violent. I hope they clean that place up."

A retired resident on the corner of the block said he's had enough of the crime, vagrancy and drug activity in the neighbourhood.

He said he's ready to move away after multiple incidents, including the theft of his vehicle.

"Clean this place up," he shouted to police manning the roadblocks.