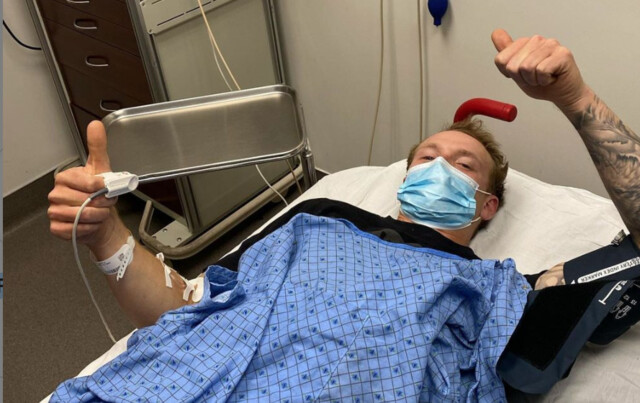 Photo: Instagram - @tvansteenbergen
Tom van Steenbergen gives a thumbs up from a hospital in Utah after a serious crash Friday.

Twelve of the world's best freeride bikers competed at Friday's event in Virgin, Utah, with Whistler's Brandon Semenuk taking the top spot for the second year in a row.

On his first run, van Steenbergen landed a front flip off a massive drop – a move that would ultimately win him the best trick award. But just seconds later, he attempted a back flip off the very next jump, landed awkwardly, and went over his handlebars.

The elation and excitement from the announcers quickly turned to stunned silence as van Steenbergen lay in dirt for several minutes, with medical staff attending to him.

The 25-year-old was taken to a local hospital, where he later posted an update on his condition to Instagram, along with a photo of himself giving a thumbs up from his hospital bed.

“I’ve received hundreds of amazing messages from you guys, and I wanna thank you all from the bottom of my heart,” van Steenbergen wrote.

“I’ve broken my left and right hip sockets into multiple pieces, a piece off the top of my femur, and a piece of my lower vertebrae. Unfortunately I separated the same shoulder I just healed as well.

“Feeling extremely lucky to be able to make a full recovery after that horrible slam.”

He added that he's undergoing “a long surgery” Saturday.

This was his sixth time competing at Rampage, coming off a third-place finish in 2019, the last time the event was held.

Riders and their trail-building crew spend days building their own trails out of the extremely steep rock faces, before practising their runs and preparing their tricks. On competition day, each rider has two chances to complete their runs, hitting jumps and dropping cliffs while throwing flips, spins and other tricks.

Judge's score the runs based on style, tricks, difficulty of lines, and the size of the jumps and drops chosen.

The winner of the 2018 event, Brett Rheeder, was born in Ontario but now also calls Vernon home. He was unable to participate this year due to a knee injury he suffered in September.