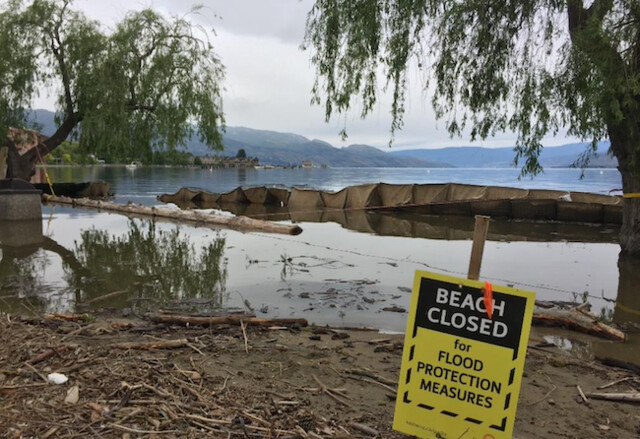 The Okanagan Basin Water Board is pushing for hundreds of millions in funding for its three highest priority initiatives.

In a letter to the province's select standing committee on finance and government services, the water board says those priorities are:

The board notes the level of Okanagan Lake fluctuates more significantly than in the past, due to climate change, and the infrastructure and operating plan "are no longer adequate."

"In 2017, we had the worst flood in living memory, and in 2021 the lake was nearly the lowest level in its historical range. Flooding is projected to become much more common in the next few decades, damaging public and private infrastructure – at great cost. Drought is also projected to become more common, challenging the agricultural economy and creating conflict between water users," the board wrote.

The Okanagan Dam at Penticton is nearing the end of its service life at more than 60 years old, and the province needs to begin planning for its replacement, the board says.

That project is estimated to require $1 million a year for the next five years.

"There is a huge return on investment for this work, as the costs to repair damage in the future – if the work is not completed – will be astronomical," the board says.

The board says the Okanagan watershed is at "very high risk" for invasion by zebra and quagga mussels.

B.C., Alberta, Yukon and Saskatchewan are the only provinces that have not been affected.

The only way to prevent the mussels from invading the Okanagan (beyond banning the launch of out-of-province boats) is through continued inspection and decontamination.

The Okanagan and Similkameen Invasive Species Society found, in a 2020 boater survey, that only 67% of out-of-province boaters stopped at an inspection station.

"With so much at risk, the province ... must ramp up inspections to ensure that no boats enter B.C. without inspections," the water board says.

It wants to see provincial spending of $3.8 million a year, adjusted for inflation, to keep the mussels at bay.

The water board says such an ongoing fund would require $75 million a year to protect water sources in the Okanagan and across the province.

In total, these commitments would total $399 million over the next five years.