'The only solution I have' 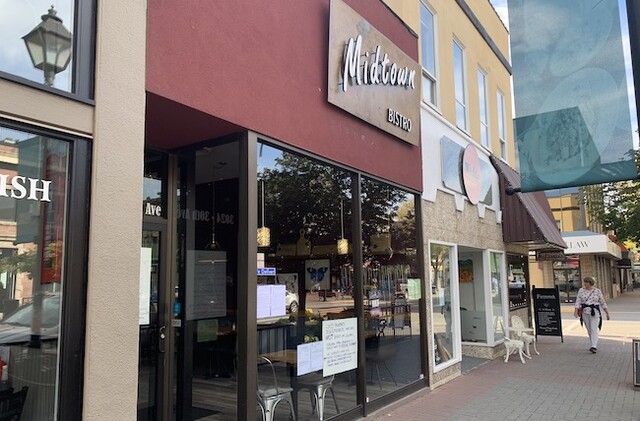 The owner of Vernon's Midtown Bistro says she has little choice but to cut back to takeout service only in light of B.C.'s vaccine passport restrictions.

In an emotional post on the downtown restaurant's Facebook page, Kelly Lacroix says: "I cannot, against my soul, check for a passport."

The restaurant has publicly stated its opposition to the passports, but Lacroix says she has been trying to play within the rules.

A sign in the window says: "COVID passports discriminate and are not based on science. Forcing small business to police them is medical tyranny."

Lacroix says she thought she had a plan "that we thought would keep us going," involving temporarily suspending the restaurant's liquor licence and moving to counter service.

That would put the eatery in the same class as fast food outlets, which are not required to ask for the passports.

However, she says she was told by a liquor inspector that if she gave up the liquor licence it would be "gone for good" and that if anyone without a passport was found in the restaurant, both it and the customer would be fined.

"The only thing left is to go to takeout," she said in the video. "It's the only solution I have."

Lacroix gets tearful near the end of the clip and says the implementation of the passports has left her "super sad and mentally exhausted."

"I cannot and will not in good conscience check a passport at the front door," she said. "I feel it's discriminating against the people who have been supporting me for five years. I'm not turning my back on them."