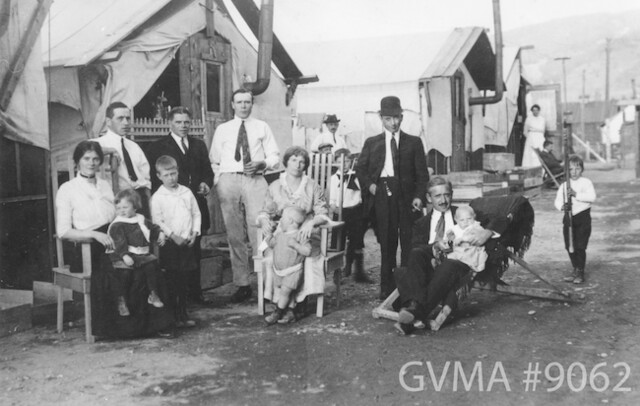 Photo: Greater Vernon Museum and Archives
Group photo of a family of men, women and children who were internees in the Vernon internment camp during the First World War.

On Sept. 18, 1914, the Vernon Internment Camp opened on the site of what is now MacDonald Park. Around 1,100 men, women and children, mostly of Austro-Hungarian and German descent, passed through the Camp’s gates before it closed in February 1920.

They were stripped of their rights and deprived of their freedom, some of them even remaining imprisoned for several months after Armistice.

A significant amount of past and ongoing research has rightly been invested into this topic, and initiatives continue to recognize and remember those who survived — and those who did not survive — internment.

In 2015, the Vernon and District Family History Society completed the Vernon Internee Headstones and Monument Project. This project, which was funded by the Canadian First World War Internment Recognition Fund, uncovered information about the 11 men who passed away in the Vernon Internment Camp.

All 11 were originally buried in the Pleasant Valley Cemetery, but four were of German origin and were later transferred by the German War Graves Commission to the Woodland Cemetery in Kitchener, Ont.

The other seven remain interred in Vernon. Thanks to the efforts of the Family History Society, all of their headstones have been restored or replaced, and their lives commemorated.

While the stories of all 11 men can be found here, one example is that of Leo Mueller, a German who came to Canada in 1906 and was naturalized in 1909. Leo and his wife Martha settled in Vancouver, where he worked as a hairdresser. They had two children, a daughter and a son, who both sadly died before they were toddlers.

In 1916, Leo and Martha were arrested and interned in Vernon. Leo was injured during an altercation with a fellow prisoner and died in the Vernon Jubilee Hospital on July 12, 1919.

While Leo died from an injury, most of the other 10 men succumbed to illnesses including tuberculosis, pneumonia, heart disease and meningitis.

With this weekend representing the 107th anniversary of the camp’s opening, we remember all who lost their freedom and — in the worst of cases — their lives in the Vernon Internment Camp.