How did Sagmoen get hired? 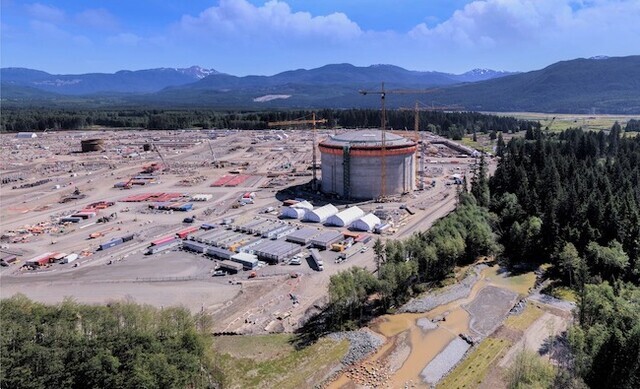 A North Okanagan man convicted previously of assaults on sex workers and now facing a charge of assaulting a police officer would not have been working at the LNG Canada project site in Kitimat had the subcontractor who hired him done proper background checks, say northwestern B.C. women’s rights advocates.

“Look at his history, how could he have bypassed the subcontractor? And he wouldn’t have if they had a criminal check,” said Gladys Radek, a Murdered & Missing Indigenous Women and Girls (MMIWG) activist who resides in Terrace, of Curtis Sagmoen who was removed from the LNG Canada project site following an outcry after his presence was made known on social media.

While LNG Canada would not confirm the name, a spokesperson told The Terrace Standard Sept. 15 that an individual who was at the work camp for several days had been “removed from site and escorted by security from the region.”

On Sept. 14, Matriarchs in Training (MIT), a Terrace-based group that is advocating for Indigenous women, was alerted to Sagmoen’s presence through information received by Radek.

“He’s got a history of abusing women,” said Radek of previous convictions of assaulting sex workers dating back to 2013.

Sagmoen is now charged for allegedly assaulting a police officer on Oct. 29, 2020 near Falkland with a trial date set for January 2022.

The same month, in Oct. 2020, Vernon RCMP issued a public warning and released his photo to ensure the safety of women in the sex industry after multiple women were assaulted in the past.

Radek, who was also involved with the 2019 federally commissioned National Inquiry into MMWIG, attended a protest earlier this year in April outside the Vernon courthouse when Sagmoen’s trial date for assaulting a police officer was set.

That protest was prompted after the remains of 18-year-old Traci Genereaux were discovered at the Sagmoen’s family’s property in Salmon Arm after an extensive search in the fall of 2017.

At the time, five women – Caitlin Potts, Ashley Simpson, Deanna Wertz, Genereaux and Nicole Bell – were missing from the North Okanagan area. No charges have been laid in connection with Genereaux’s death.

Sagmoen had been found guilty of assaulting women in three separate incidents in 2013, 2017 and 2019.

The most recent incident, in which he pleaded guilty, resulted in a sentence of time served in prison, as well as 36 months of probation. With the exception of his assault convictions, none of the charges or allegations against Sagmoen have been tested in court.

According to Hilary Lightening from MIT, LNG Canada looked into the issue quickly as a result of public pressure through “people’s power” in the region.

LNG Canada did not confirm the details of how and when it was alerted but said, “Upon learning of the situation, [officials] immediately took action to ensure the individual was put under surveillance.”

MMIWG activists said the incident reinforces concerns long since raised about industrial projects they call “man camps” and their impact on women’s safety in the northwest.

Former Terrace councillor Jessica McCallum-Miller had raised issues of personal safety as an Indigenous woman in March 2020 following the influx of thousands of male workers into LNG Canada campsites in Kitimat.

McCallum-Miller, who is also a part of MIT, said while Sagmoen is only one dangerous individual, she has heard about women facing abuse/assault from workers in these temporary work camps in the North over the years.

“This is still a reality and Indigenous women are still at risk,” said McCallum-Miller.

Although Sagmoen was an employee of an LNG Canada subcontractor, a spokesperson for LNG Canada said “project subcontractors associated with the LNG Canada project are accountable for their hiring decisions based on best practices and in accordance with applicable laws. We have initiated a review of the process that led to this individual being on our worksite.”

According to Radek, it is the responsibility of the people that are moving their industries into the region “to guarantee the safety of our women and girls in our community.”

“When you’re working on a big project like that, and again man camps come in, of course there’s going to be all kinds of subcontractors. LNG has a responsibility as well, to ensure that those subcontractors are also reliable,” she said.

While LNG Canada did not specify the next steps involved in addressing this issue, they did say they are “committed to listening and learning from the experience of Indigenous women, girls and the 2SLGBTQQIA community with past resource development projects to ensure LNG Canada takes into account and addresses their concerns for safety and security,” the company said in a Sept. 16 email statement.

“This commitment is always top of mind and was considered in the actions that were taken.”

Sagmoen’s earliest recorded offence dates back to June 2002 for multiple counts of traffic violations in Maple Ridge and Surrey.

He also has an offence recorded in Terrace from July 31, 2016, and was issued a fisheries violation ticket.

Radek is disappointed in the sentences for assault that were handed down to Sagmoen to date.

– With files from Caitlin Clow