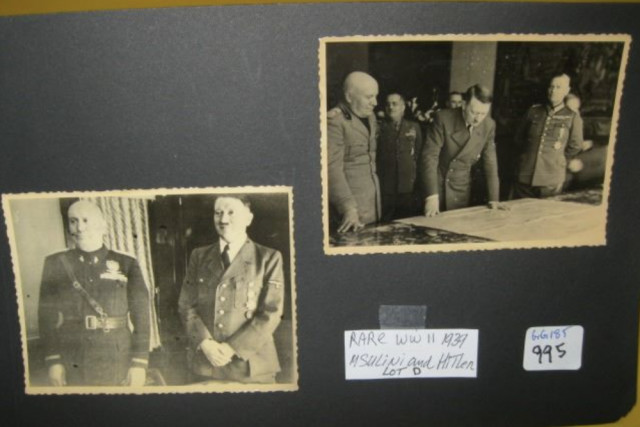 The president of the Okanagan Jewish Community Centre is concerned about the hands several pieces of Nazi memorabilia up for auction in Vernon may end up in.

The auction site lists Saturday's sale as an estate auction.

The majority of lots include the typical jewelry, coins, furniture, antiques and collectibles.

But, OJCC president Stephen Finkleman says it is the Nazi memorabilia that causes concern.

"I gather it's not illegal to sell these types of things, but is despicable and encourages certain people who might be swayed by far-right propaganda."

Finkleman says he has sought advice from national anti-semitism organizations and would prefer such items be displayed in "the right historical context."

"I'm concerned these items might be used to incite hatred," he said.

A spokesman at Dodds Auctions told Castanet the items belonged to a collector who was a resistance fighter during the war.

They are being sold by his son in the estate sale.

Some of the photographs show what appear to be Russian soldiers marching in the streets of Kiev. Others show Russian tanks.

In one photograph, Hitler can be seen studying maps with former Italian dictator Benito Mussolini.

The pins are emblazoned with the Nazis' swastika symbol.

The spokesman said the items have only "historical value," and the auction house "wouldn't touch" anything of a more graphic nature.

"I've seen items before that people didn't know what to do with. If they are too graphic or sensitive, we encourage them to donate them to places like the Simon Wiesenthal Centre to get them out of circulation."

In 2019, a Richmond auction house pulled items of Nazi memorabilia, including an officer's dagger, from sale after backlash from the Jewish community and local politicians.

"Dripping with the blood of six million Jews," is how Michael Sachs, the past-president of Richmond's Bayit Synagogue, described the items.

He said such items should not be sold for profit. Rather, they belong in a museum or educational institute where they can be displayed with the right context.