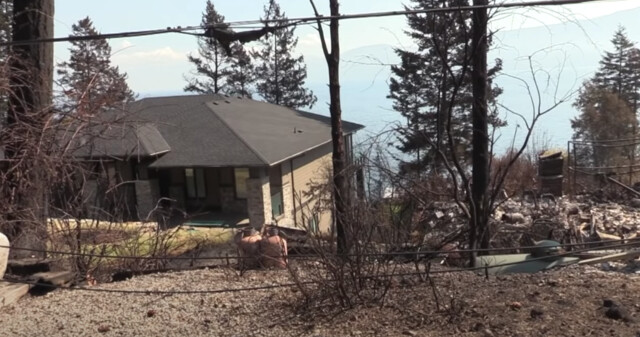 The Okanagan Indian Band rescinded the evacuation order to alert for areas down to Goodwater Drive. Residents can return home to their residence this evening, or can stay the night at their accommodations and return at their convenience tomorrow.

The evacuation order remains in place for all addresses south of Goodwater Dr., until further notice.

An evacuation alert remains in effect for all properties west of Highway 97 and south of Irish Creek Rd.

The Evacuation Alert has been rescinded for all properties east of Hwy 97 and along the east side of Okanagan Lake. 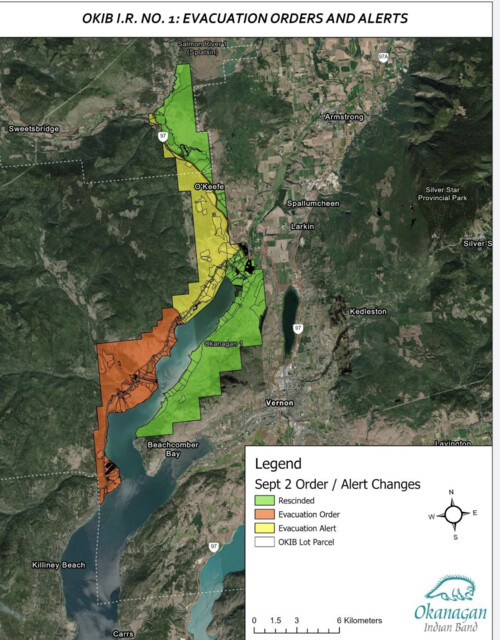 One of the most destructive fires in the BC Interior's recent years is now classified as "held."

The BC Wildfire Service announced Thursday evening that the White Rock Lake fire is not likely "to spread beyond determined containment lines due to the suppression carried out by" crews.

The management of the fire, which tore through the communities of Monte Lake and the Upper Westside, involved crews from across the globe.

"Over the last 52 days, firefighters and support personnel from around the world have maintained response efforts on the White Rock Lake wildfire. The BC Wildfire Service thanks the commitment of heavy equipment operators, helicopter pilots, camp kitchen operators, facility managers, incident support staff, security staff, among countless others, to keep firefighters supported on the ground," BCWS said in a statement.

The fight, however, is not done.

"The BC Wildfire Service will remain engaged in wildfire suppression efforts until there is no risk of impact to public health, critical infrastructure, property, or environmental, economic and social values," the agency said.

The evacuation order issued for the west side of Irish Creek Road within Electoral Area ‘B’ due to the White Rock Lake wildfire has been rescinded.

All homes in the rescind area revert to evacuation alert status and residents must remain ready to leave their homes again on short notice if the fire situation changes.

The affected area includes 20 properties on the west side of Irish Creek Road and Beatrice Road that are not within the Okanagan Indian Band IR#1.

A full list of the properties now on evacuation alert can be found here.

The evacuation order issued for the remaining properties in Electoral Area ‘B’ located on the west side of Okanagan Lake remains in effect and a list can be found here. 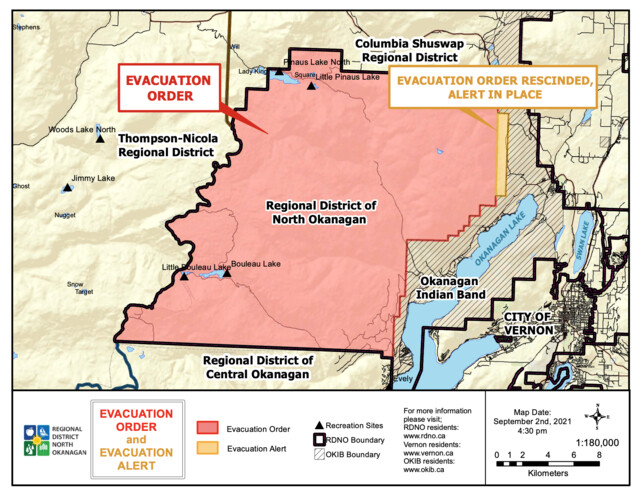 More people will be allowed to home after being evacuated due to the White Rock Lake fire.

In consultation with BC Wildfire and Ministry of Transportation and Infrastructure, the Central Okanagan Emergency Operations advises evacuation orders for Ewings Landing, Killiney Beach and Westshore Estates neighbourhoods have been rescinded and downgraded to evacuation alerts.

Residents re-entering the area must enter from the south along Westside Road as the north end of the road remains closed until further notice. No access will be permitted from the north to any properties in RDCO.

Non-residents should avoid using Westside Road between Firwood Road and Irish Creek Road. In order to help with managing traffic flows, residents returning to Westshore Estates are asked to consider postponing their return until after 5 p.m.

Residents may find a number of hazards in their homes or on their properties. Residents should consult the Re-Entry Checklist and other important information in the Returning Home Guide available online.

As some residents prepare to return home and some evacuation alerts are cancelled, officials are reporting no further growth at the White Rock Lake fire.

The Aug. 30 ignitions in Irish Creek, and precipitation across the fire, has reduced risk of further spread on most of the fire perimeter. The planned ignition on the White Rock Lake wildfire was 975 hectares in size.

The burn plan objectives were to mimic natural wildfire with up to 30 per cent tree mortality and understory woody debris consumption.

The Irish Creek area has more than 40 years of debris buildup. Areas that had significant fuel build up, combined with steep slopes, burned with more intensity.

This resulted in a patchwork burn with pockets of more intense fire behaviour that is seen when natural wildfire moves through a forest.

Ground crews used hand ignitions to bring the fire down to six kilometres of guard along the northeast perimeter.

Out of the 975 hectares, 14 hectares of fire burned across containment lines in a 920 metre stretch along the guard when decked logs ignited by more intense fire behaviour. A unit crew managed this excursion with full containment achieved the next morning on Aug. 31.

The evacuation alerts in Electoral Area “L” (Grasslands) and Electoral Area “M” (Beautiful Nicola Valley-North), issued Aug. 13-17 have been rescinded to all clear as the threat of wildfire in the area no longer poses an imminent risk to the safety of residents.

Valley of the Sun residents should all be home by the weekend.

The White Rock Lake wildfire evacuation order for the subdivision was downgraded to an alert Wednesday, allowing their return home.

"While orders remain in place for other parts of the area," the Central Okanagan Emergency Operations Centre says "it is expected that all evacuated residents will be able to return to their properties by the weekend."

"We are close to bringing people safely home, thanks to the hard work of firefighters of the North Westside Fire Rescue and the men and women from fire departments from around the province,” Fire Chief Alex Van Bruksvoort said Thursday. "It's almost time to turn the corner, we're almost there – and we appreciate everyone's patience during this trying time."

Meanwhile, the BC Ministry of Transportation and Infrastructure has assessed hazards on Westside Road between Shalal and Firwood Roads.

Residents re-entering the area must enter from the south along Westside Road. Traffic control will be in place to ensure only local traffic enters.

Westside Road will remain closed from Firwood to Irish Creek Roads until further assessments and mitigation work can be completed.

The rapid damage assessment team completed its assessment of neighbourhoods directly impacted by the wildfire late on Sep. 1. Returning residents are reminded they may encounter some remaining hazards on their properties.

Wednesday’s returning-home information session provided residents with information about what to expect as they prepare to go back to the area. The recorded session is available here.

The EOC has also posted information for residents returning home.

While recent cooler temperatures and precipitation have supported fire suppression efforts, the fire continues to be active and is classified as out of control by the BC Wildfire Service.

As focus begins to shift to local-area recovery, the RDCO has set up a dedicated recovery office. Residents and property owners who experienced significant structural damage will be able to access resources at rdco.com/recovery, email [email protected] or call 250-469-6111.