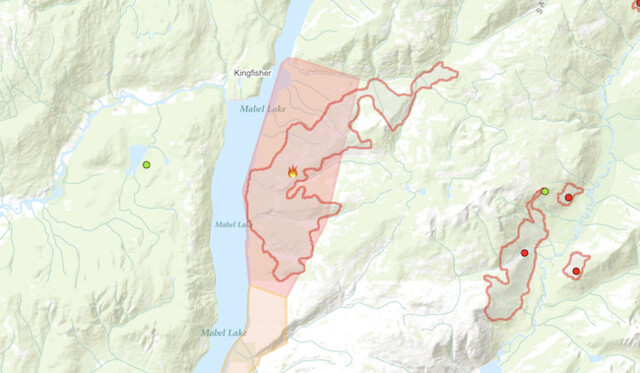 A successful planned ignition at the Bunting Road fire Friday removed unburnt fuels to further secure the southwest corner of the blaze.

Smoke did moderate the weather conditions resulting in lower fire behaviour Friday as well, but a planned ignition for today was cancelled due to the weather at the Mabel Lake fire.

Crews will be working to mop up Friday's planned ignition from the south west corner to the control line.

On the north side, direct attack operations to secure the established guard is complete. A machine guard is also being constructed on the east side, making progress northwards.

On the west side, crews and heavy equipment have made significant progress securing this side of the fire, nearest to Mabel lake. A machine guard was completed to protect structures along Mabel Lake FSR.

A thermal imaging scan was completed on the west side on August 10th, and crews continue to extinguish hotspots identified in the scan results.
Structure protection has been removed from all structures in the vicinity of this fire.