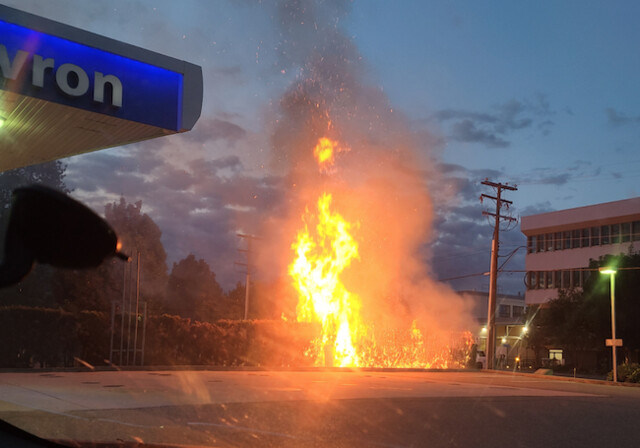 Photo: Kaylie Payne
There was a hedge fire near the Chevron station on 32nd Street overnight.

Vernon Fire Rescue Services were called to yet another brush fire.

It was the third call for the Vernon fire crew in 12 hours.

Multiple 911 calls were made about a fire in some trees across from Vernon Square, the same general area where another fire occurred at 11 p.m. Friday.

Officials at the scene said evidence of a homeless camp was found in the trees and they suspect the latest incident was a campfire that got out of hand.

A hedge fire at 4:30 a.m. Saturday had crews scrambling to the Chevron station on 32nd Avenue.

At approximately 11 p.m. Friday, Vernon Fire Rescue Services was dispatched to a fire near the intersection of 32nd Street and 43rd Avenue near Vernon Square.

“Upon arrival, firefighters found three or four large trees on fire and the fire was spreading into some bushes along the ground. The fire took place beside a power pole, but thanks to the quick action by the crew, the fire did not impact the power pole, nor the power lines,” said City of Vernon spokesperson Christy Poirier.

Then, at approximately 4:30 a.m. Saturday, firefighters were dispatched to another fire on 32nd street in a hedge near the Chevron gas station that was spreading quickly.

“Again, because of the quick and skilled response by the crew, the fire was contained in a short period of time and did not impact any nearby structures,” said Poirier.

The cause of both fires is not known and RCMP are investigating.

Members of the RCMP were on scene of both incidents.

There are reports of a second hedge fire in Vernon.

A fire was reported at 11 p.m. Friday near the Safeway gas bar on 32nd Street and 43rd Avenue.

Emergency crews were called to a fire in downtown Vernon overnight.

Kaylie Payne tells Castanet the fire started near the Chevron gas station beside Vantage 1 at 32nd Avenue and Highway 97.

Payne said bushes beside gas station were on fire.

“Fire and police on site within minutes of 911 being called,” she said.