Evacuations from the Clerke Road fire have now been rescinded, fire being held 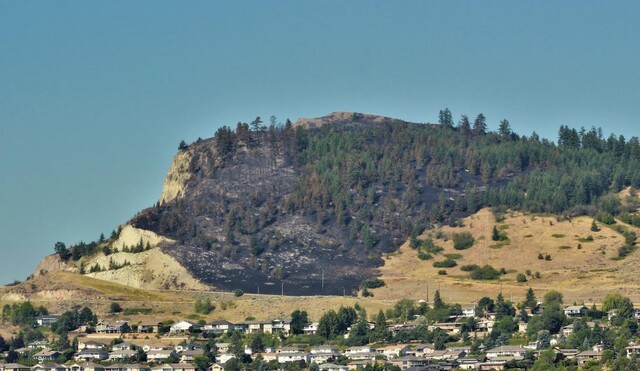 The Regional District of North Okanagan has announced that evacuation alerts are rescinded for properties on Clerke Road and in Electoral Area “B”.

The fire that sparked on the west side of Kalamalka Lake along Highway 97 on Friday evening quickly spread throughout the hillside. By mid-day Saturday, the fire was updated as being held.

“Crews have worked tirelessly to achieve this result, and we sincerely thank them for working throughout the night and today to control such a fast-moving fire,” said Ashley Gregerson, RDNO EOC Information Officer.

Firefighters and emergency service personnel worked throughout the night to contain the fire, and thanks to their hard work, no structure damage or injuries were reported.

The 20-hectare wildfire that sparked south of Vernon Friday night is not expected to grow any further, but evacuation alerts remain in place Saturday for a number of homes in the area.

The Regional District of North Okanagan says dozens of homes on Clerke Road, Kalamalka Lakeview Drive and Highridge Road remain under an evacuation alert, and residents should be prepared to leave at a moment's notice.

Some homes on Clerke Road were evacuated overnight, but residents were allowed to return home Saturday morning.

No building were impacted by the fire, and no injuries have been reported.

Despite the rapid growth of the Clerke Road fire Friday night, no buildings were lost and no one was injured, thanks to the coordinated efforts of firefighters from several local fire departments and the BC Wildfire Service.

The fire was sparked at about 10 p.m. near Clerke Road and Highway 97, and firefighters from across the region were called in to assist. In addition to the 23 Vernon Fire Rescue personnel on scene overnight, crews from the District of Coldstream, Lavington, BX-Swan Lake and Lake Country also attended, along with dozens of BC Wildfire Service firefighters.

“Last night’s fire was a fast-moving event and involved many emergency response agencies from across the North Okanagan and the BC Wildfire Service,” said VFRS Fire Chief David Lind.

“Thanks to the quick and coordinated approach by all those involved, firefighters were able to ensure no structures were lost. No injuries were reported as a result of last night’s event.”

Crews remain on scene Saturday morning putting out hot spots, but the fire is now classified as "held," meaning it's not expected to grow past its current boundaries. The fire burned about 20 hectares of land.

Police are on scene near Clerke Road and Highway 97, where Friday night's fire is believed to have started, and police tape surrounds the area.

At this time, the official cause of the fire has yet to be determined, but it appears to have started near the side of the highway. One man, who was first on scene, posted to Facebook that he believed it was started by a tossed cigarette butt.

The fire is now classified as "held," meaning the BC Wildfire Service does not expect it to grow any further.

After starting around 10 p.m., the fire spread up the hill to the west, and along the highway to the south, reaching as far south as Birnie Road – the turnoff to the Vernon dump. And while it appears to have come close to the landfill, it did not reach it.

To the north, a number of homes on Clerke Road were evacuated overnight, and while the fire appears to have come within about 400 metres of the nearest home, no buildings were impacted by the fire.

Fire crews continue to put out hot spots on the fire Saturday morning.

The Clerke Road wildfire that forced the evacuation of a number of homes Friday night is now officially classified as "held."

This means the BC Wildfire Service does not expect the fire to grow beyond its existing boundaries, but fire crews continue to work on the blaze Saturday morning.

Two helicopters are bucketing the south side of the fire, near the Vernon dump, while the fire appears to be all but out near Clerke Road, where it's believed to have been started.

"All the crews overnight worked great, and we've got air support on it right now, bucketing on it, and crews are still on it," said fire information officer Noelle Kekula.

Kekula was not sure exactly how many BC Wildfire Service firefighters worked on the blaze overnight, "because it all happened so quickly," but dozens of wildland firefighters assisted five regional fire departments to fight the fire.

"People are incredibly tired, but the good news is, it's being held," Kekula said.

The fire was sparked at about 10 p.m. Friday night near Highway 97 and Clerke Road, and it quickly moved up the hill. While homes on Clerke Road were evacuated overnight, residents were allowed to return home Saturday morning. Many homes in the area remain on evacuation alert.

Kekula could not say if the fire reached any homes in the area.

The fire did not reach the Greater Vernon Diversion and Disposal Facility overnight, but the dump will be closed Saturday to give fire crews the space they need.

Meanwhile, northbound highway traffic is being diverted along Kalamalka Lakeview Drive, while southbound traffic is using the highway's northbound lanes.

Residents of Coldstream's Clerke Road can return home Saturday morning, after a fast-moving fire forced some from their homes overnight.

Just after 7 a.m., the tactical evacuation orders on Clerke Road were rescinded, but an evacuation alert remains in place there, and . This means residents in the area should be ready to leave at a moment's notice.

A number of homes were evacuated just after midnight after the wildfire was sparked near Highway 97 and Clerke Road after 10 p.m. The fire quickly moved up the hill to the southwest.

As of Saturday morning, the fire is believed to be about 20 hectares in size. Photos from the scene show charred grass and trees to the top of the hill above Clerke Road.

DriveBC says Highway 97 through the area is open, with a single lane operating in each direction.

A wildfire burning south of Vernon above Highway 97 in Coldstream has burned 15 hectares, according to the BC Wildfire Service dashboard.

The Clerke Road fire sparked Friday night beside the the highway and roared up the hill beside Clerke Road, dangerously close to homes.

In a late-night update, the City of Vernon said as of 2:30 a.m. emergency response continues with a unified command from five regional fire departments, the BC Wildfire Service, RCMP and BC Ambulance Service.

A tactical evacuation of residences along Clerke Road took place about 12:30 a.m., and the District of Coldstream Emergency Support Services Centre was opened for evacuees, at the Town Hall on Kalamalka Road.

Evacuation alerts were in place overnight for homes on Commonage Road, between Allan Brooks Way and Bailey Road.

Police went door to door early this morning to notify residents of an evacuation alert on Kalamalka Lakeview Drive and Carriage Lane as well.

The fire remains out of control.

DriveBC reports, as of 6 a.m., southbound lanes of Highway 97 are closed, and single-lane traffic in both directions is being routed along the northbound side of the highway.

The District of Coldstream has opened its municipal hall for evacuees of Clerke Road who are under tactical evacuation.

Emergency Support Services are being offered at 9901 Kalamalka Rd.

The municipality has also activated their emergency operations centre.

The fire is the most active on its southern flank near the landfill and has not crested over the hill to the Commonage. The fire is mostly knocked down at its north end and point-of-origin along Highway 97 at Clerke Road.

Updates on this fire will resume at 6:30 a.m., or sooner should the blaze advance towards homes.

The City of Vernon has confirmed tactical evacuations are underway along Clerke Road due to the wildfire.

Vernon Fire Rescue Services is being supported by several other fire departments in the region and the BC Wildfire Service.

Vernon North Okanagan RCMP and BC Ambulance Service are also on scene. The fire is currently listed as out of control.

Highway 97 has now reopened to single lane alternating traffic, said the City of Vernon, but motorists are being asked to avoid the area.

The City of Vernon has activated its Emergency Operations Centre and is actively gathering information and resources to assist the fire response.

The wildfire is now most active on its south flank, burning towards the landfill being pushed by a breeze.

The blaze still has not crested the hill towards Commonage Road.

Fire activity has subsided significantly on the side of the blaze closest to the highway. The fire continues to move along the ground, burning through grass, until it hits trees and candles them.

The fire is now slowly advancing directly towards the landfill.

Residents of Clerke Road have posted to social media saying they have been tactically evacuated due to the fire.

The fire, however, appears to have burned up the mountain and away from homes since breaking out along the highway at the south end of Clerke Road.

The fire is now burning mostly on the ground, but trees are periodically candling. The fire still has not crested the hillside and Commonage Road remains open.

A crowd of hundreds of people have gathered at the Okanagan College Vernon campus to watch the flames.

The fire has burned up the hill and into the trees, which are now candling, sending flames into the sky.

The blaze has not crested the hill yet.

In addition to being closed at Clerke Road, Highway 97 is also closed at Bailey Road, where Highway 97 traffic is being detoured onto Commonage Road.

Several fire trucks are on scene with more coming from Lake Country.

Highway 97 is closed in both directions at Clerke Road.

The fire appears to have started as a grass fire at the side of the highway but has quickly run up the hill and into the trees on the ridge above Kal Lake.

Fire crews are on scene.

A large grass fire has broken out off Highway 97 in Coldstream.

The fire near Clerke Road is spreading up the hillside away from the highway and is very visible from the surrounding area.

Castanet has a reporter en route. 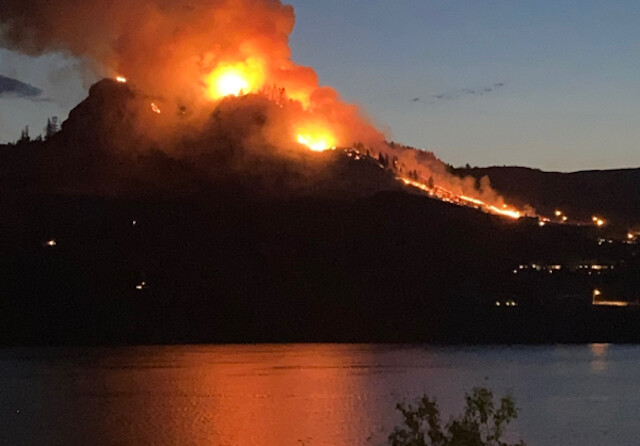 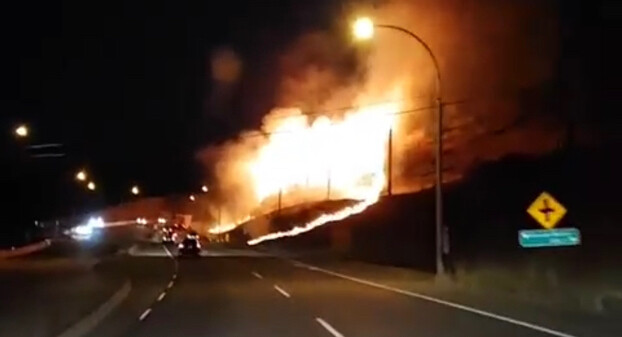