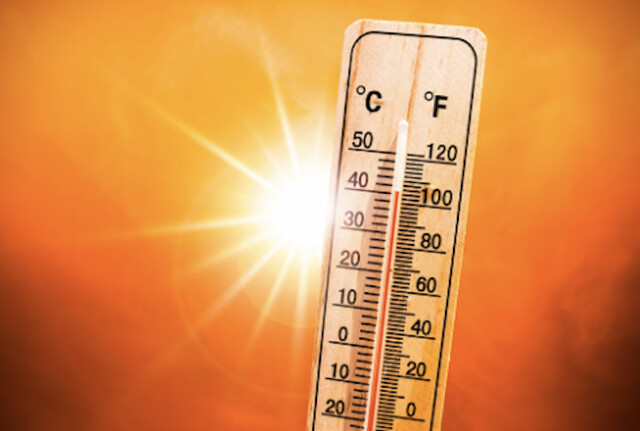 Tom Davison is a third-generation North Okanagan orchardist and says cherry pickers are having a hard time.

“It is a real struggle. They are literally working in the night with head lamps because they can't work during the day, and (the heat is) making the fruit ripen more quickly,” said Davison.

It's not just humans that are finding the heat a challenge.

“The workers bees will stay out of the hives as much as possible to keep it cool or they will grab some water, bring it back and evaporate it to keep the hive cool,” said Kane. “The main impact that we are expecting from this heat wave is all of their food is going to dry up, like the flowers, so there is not going to be as much honey flow this year.”

Kane said the bees can survive the heat, but they will likely only be able to make enough honey to sustain the hive and “we won't be able to take any honey from them.”

Meanwhile, Davison says “there is some sun-burning on the apples, but overall, up to this point, as long as you are able to keep up with the irrigation, you will do OK.”

Davison says the quality of the fruit has been “amazing” so far this year, and the timing of the heat wave will also help to minimize damage.

“The closer the crops are to harvest, the harder the heat is on them,” he said.

Crops will likely come in 10-14 days earlier than usual this year. Last year, crops were one to two weeks behind due to the cool, wet weather in June.

Davison says tomatoes, peppers, corn and other vegetables will likely be harvested in late July, rather than early to mid-August.

“This will push us to an earlier harvest,” he said. “And when it is this hot, it can hurt fruit size, but things got off to a beautiful start and I'm hoping this will help to balance things out and we will still have good-quality fruit.”

Not surprisingly, the biggest challenge is getting enough water to the plants.

“The irrigation system are not designed to handle this kind of heat,” he said.