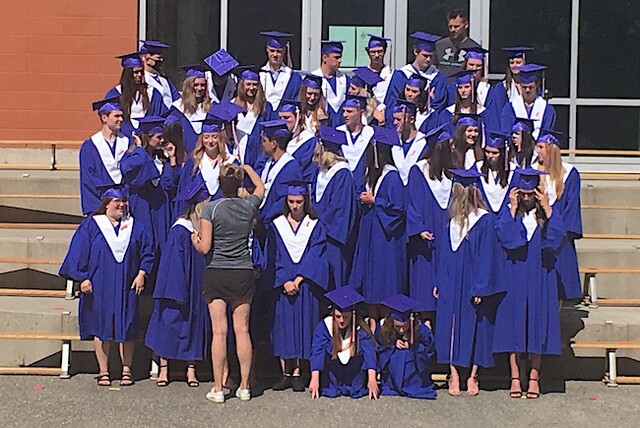 The traditional grad class photo for graduates of Vernon Secondary School is a little different this year – again.

Last year, due to the COVID-19 pandemic, photographer Wayne Emde shot the grads in small groups on the steps of the Vernon courthouse that were then photoshopped together by Mary-Anne Morgan.

The courthouse photo in cap gown has been a VSS tradition for more than 50 years.

But this year, it won't be happening so as not to disturb the memorial on the courthouse steps to the bodies of 215 First Nations children recently discovered buried on the grounds of the former residential school in Kamloops.

Instead, the grads are being photographed on the steps of VSS.

On Monday, Emde was taking photos of the grads in cohort groups that will then be merged together into a single grad class photo.

Another school tradition that was revived last year after a long hiatus will also look different this year.

The grads were given permission to paint Suicide Hill in 2020.

The tradition ended in 1981, but the one-year return was short-lived.

After the painting of the street, a move gained traction to drop the hill's unofficial nickname, and the City of Vernon agreed to stop using the name. A new name hasn't officially been designated, with the city referring to it as "30th Avenue Hill."

This year, VSS grads will instead paint the school parking lot.