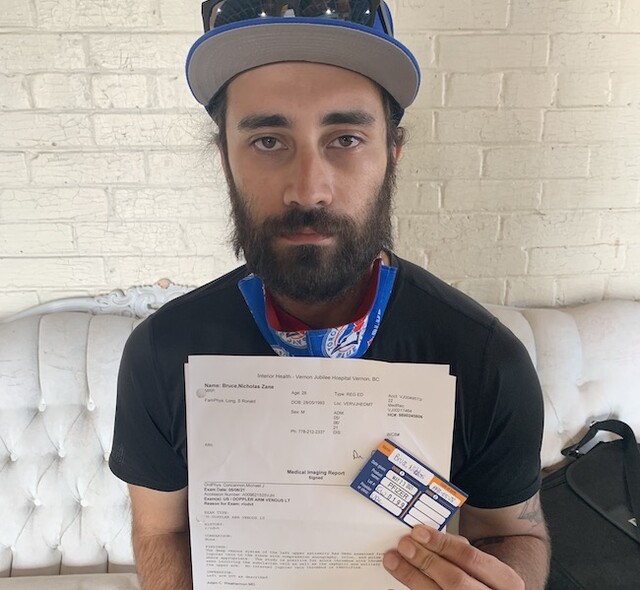 The latest BC Centre for Disease Control report appears to confirm that a Vernon man's blood clots were not related to the COVID-19 vaccine he received two weeks earlier.

The weekly report, which lists adverse reactions to immunizations, was released Thursday and covers the pandemic period up to June 12.

"No safety signals have been identified in association with the mRNA reports received in B.C. to date," the report states.

"There have been three reports of thrombosis with thrombocytopenia syndrome reported in B.C. to date in association with over 300,000 doses of the ... AstraZeneca/COVISHIELD (vaccines) administered. This syndrome was identified in March in Europe in association with the AstraZeneca vaccine, with a small number of cases accumulating in Canada associated with use of these vaccines at rates of about 1 in 50,000 to 1 in 100,000 recipients."

Nicholas Bruce says he began feeling chest pains two weeks after receiving his first dose of the Pfizer vaccine on May 23 at the Vernon Recreation Centre clinic.

The 28-year-old was diagnosed with thrombosis (blood clots) June 5 at the Vernon Jubilee Hospital Emergency Room.

Bruce says he has been at a loss to come up with a reason for the clots.

"They couldn't figure out why it happened ... I've never had anything like that happen in my life. I eat healthy, exercise, I am normally healthy," he said.

A spokesperson for Interior Health said "there have not been any clots with the TTS (thrombocytopenic thrombosis syndrome) presentation that suggests connection to vaccine following any of the mRNA vaccines in B.C. ... Problematic clots can be triggered by a wide variety of factors (injury, infections including COVID-19, cardiovascular risk factors, etc)."

The latest BC CDC report says: "B.C. is reporting higher rates of anaphylaxis than many other Canadian jurisdictions, but about half of these had lower level of diagnostic certainty and may reflect events such as anxiety or pre-syncopal (fainting) events, which are nevertheless managed as anaphylaxis out of an abundance of caution, and reported thereafter. Serious events have not been reported at rates higher than expected compared to background rates. BC is monitoring for reports of myocarditis following mRNA vaccines, which has been identified as an adverse event of interest based on reports from Israel and is being monitored in several countries."

Of those, 107 individuals were admitted to hospital.

"These included 12 individuals hospitalized after anaphylaxis, 25 for a neurological diagnosis (including three for transverse myelitis, four for seizure, 14 for stroke, two intracerebral hemorrhage with one associated encephalopathy, one meningitis, and one Guillain-Barre syndrome), 20 for cardiac events (including 11 for myocardial infarction, seven for myopericarditis, and two for an arrhythmia), 12 pulmonary embolism, one respiratory distress, one for exacerbation of idiopathic pulmonary fibrosis, one for a pregnancy related complication, seven for thrombocytopenia alone or associated with a concurrent condition, and three for thrombosis with thrombocytopenia syndrome. The remaining reports were for individuals who were hospitalized for monitoring of allergic, neurological, or cardiac symptoms but without a medically diagnosed event."