Towne closer to being saved 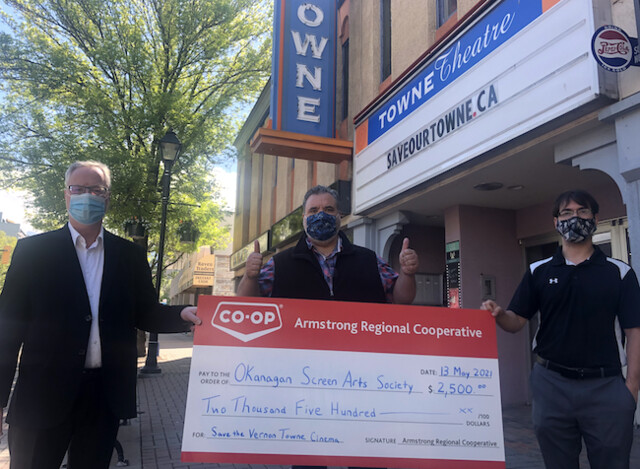 Photo: Darren Handschuh
The Armstrong Regional Co-op donated $2,500 to the campaign to save the Towne Theatre. From left, Brett Kirkpatrick, with the Co-op, Scott John, Okanagan Screen Arts Society and Robbie Hoyte, Co-op board member.

Vernon's Towne Theatre is $2,500 closer to being saved, thanks to the Armstrong Regional Co-op.

Co-op board member Brett Kirkpatrick says the donation was made as a way to give back to the community.

Scott John with the Okanagan Screen Arts Society, which has taken over future operation of the theatre, said the donation helps bring the campaign to save the historic venue to 90 per cent of it $75,000 goal.

“We are so thankful to Co-op for helping us out,” said John. “They are so supportive of local ventures like this.”

John said the goal of the campaign is to reach $75,000 by the end of the month “because there are matching federal grants we can apply for, so the we can effectively double it.”

Once the money is in, the society has big plans for the theatre, which opened in 1929 in Vernon's downtown core.

Those include renovating the building's bathrooms, making the building more accessible for people with mobility issues, and rebuilding the original stage for small live performances.

To support the Towne, visit www.SaveOurTowne.ca.

The owner of the theatre retired after being in the movie business for decades, and handed the keys to the Okanagan Screen Arts Society.