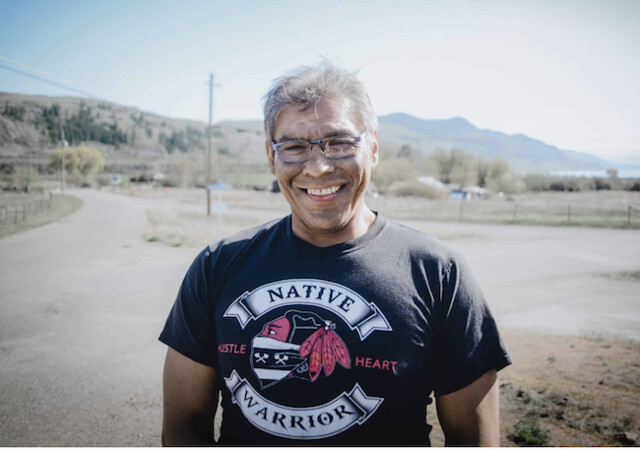 Photo: Kelsie Kilawna
?My life is truthful, and I?m not ashamed of it,? says Michael Ochoa, a Syilx man from Inkumpulux.

Michael Ochoa was sitting in the Vernon Towne Theatre when he realized he had nowhere to go.

“I didn’t have a home, didn’t have any money for a motel, and I was in shock,” he says. “I don’t even remember what the movies were.”

As film after film played on the big screen, he sat there, with thoughts running through his head. It was 2005 and Ochoa was in his 40s.

He would spend the next two years couch surfing and sleeping on the streets in his Syilx territory. Today he’s drawing on that lived experience as a youth justice worker with the Okanagan Indian Band (OKIB).

Looking back on the day when he first realized he was houseless, Ochoa says someone named Andre had a huge impact on him.

He remembers bumping into Andre after walking out of the Vernon Towne Theatre.

“[Andre] said, ‘Hello brother, what’s up?’ And he looked at me and he smiled,” Ochoa says.

“Well brother, join the club. Let’s go, I’m not going to let you walk around these streets,” he remembers Andre saying, handing him a bottle of wine.

“He took me to his little camp and made sure I was safe and that I had a place to stay, food, and, of course, booze,” he says with a laugh.

That display of humanity taught Ochoa a great life lesson, he says, and he carries that wisdom into his work with youth.

“[Andre] was homeless, but he took the time to see another human [who was] in pain and lost and [he] came over and decided he wanted to do something about it,” he says.

“A person with a home would never have done anything like that … Homelessness has a way of humbling you and really giving you that empathy for other people as human beings, because people just don’t have it in them.”.

Seeking a “new path,” he stumbled across the Human Service Work (HSW) program in an Okanagan College brochure, and he decided to sign up.

He started the program in 2013 and completed it in 2015. While in school, he started his practicum at the Upper Room Mission.

When Ochoa was houseless, he recalls going to “The Mission” quite a bit. He says he was “really popular” when he started to practicum there, because many people already knew him.

Ochoa says he is so proud to be home, in his territory, applying the lessons he learned from people like Andre to touch the hearts of his own people.

“I’m so glad I got to go on that path. Who knows where I would’ve been if I hadn’t met Andre,” he says. “That one person — he made me want to get better, he made me want to go back, not for anything he did but for who he was. You could tell he was just a beautiful human,” he fondly recalls.

Ochoa says he often combs the streets of Vernon to check on his kin. He wants anyone from his community to know that they too matter.

For a more in depth look at Ochoa's journey, visit IndigiNews.