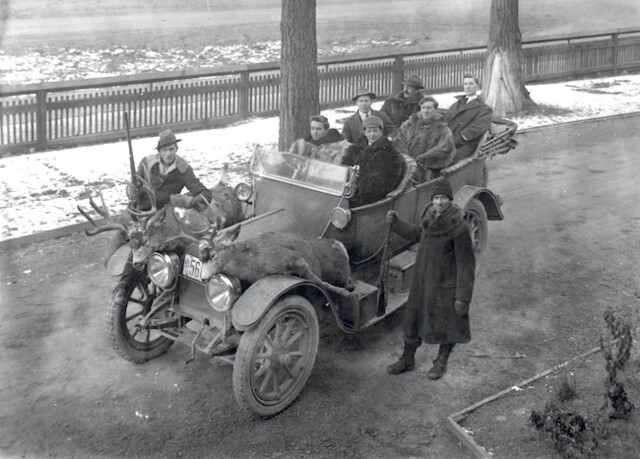 Photo: Greater Vernon Museum and Archives
A visiting hunting party in Vernon in 1914.

In honour of Earth Day last week, the Vernon Museum has taken the opportunity to research how local human activity has effected, and continues to effect, ecosystems and wildlife in the North Okanagan. This is the last in a series of articles that explore some of the results of this investigation.

Vernon was described as “A Sportsman’s Paradise” in a promotional booklet from 1891.

“Big game abounds in caribou, white and black-tailed deer, and on the higher mountains big horn sheep and goats. In more remote areas are to be found great black, cinnamon and grizzly bears. There are a few grey wolves, lynx, coyote and the king cat of the Rockies, the American panther,” the brochure stated.

This advertisement was incredibly successful, as over the next few years hunters came from far and wide to take advantage of the Okanagan’s bounty.

At this point, there was little in the way of game law enforcement, and no game wardens, and the citizens of Vernon wrote many letters of complaint against the hunting parties, most of whom were visiting from the South.

In September 1892, a hunting party from eastern Canada killed 180 sage grouse at the Head of the Lake, destined for the Vancouver market.

A party of 20 Americans arrived in a private rail car to hunt big game that same year. They took only the heads and left the meat to rot.

In a 1912 Vernon News special holiday edition, pioneer Mr. Leckie-Ewing noted big game in the Okanagan had decreased significantly in number or their haunts had moved further away. Lake trout populations, once an important food source for the Syilx People, had all but disappeared from Okanagan Lake.

Blue grouse and other fowl were still around, but their numbers had “sadly diminished when compared with … some ten or twelve years prior.”

In fact, sage grouse became extinct in the Okanagan in 1918. By the 1950s, excessive hunting also meant that mountain caribou had disappeared.

Nowadays, we are fortunate to have stricter regulations in place around hunting and fishing, and law-abiding citizens. However, before these measures were put in place, visiting hunters wreaked havoc on the Okanagan’s wildlife populations.

To help preserve our local fauna populations, trophy hunting and other wasteful practices should be discouraged. Residents should also remove or limit attractants like garbage and fallen fruit to discourage animals like bears from becoming urban visitors. Finally, do not feed or try to tame wild animals, but keep them and yourself safe by maintaining an appropriate distance.

Gwyn Evans is the community engagement co-ordinator with the Greater Vernon Museum and Archives.