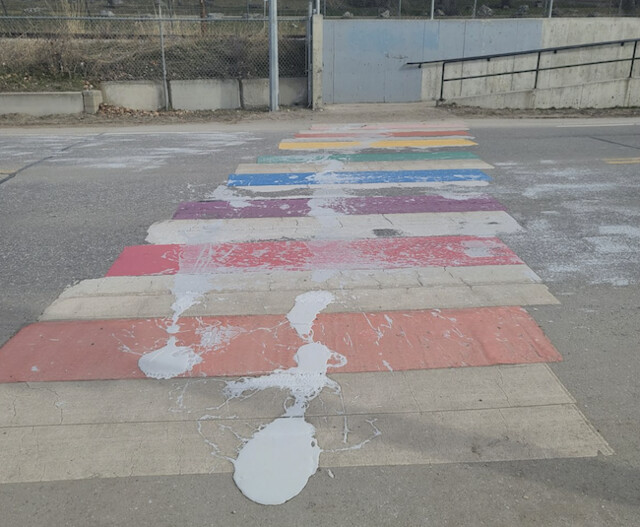 Photo: Contributed
Vandals have poured white paint on the rainbow crosswalk in Coldstream.

A local LGBTQI+ advocate is dismayed at the act of vandalism against the symbol of caring and inclusion.

Dawn Tucker called the vandalism to the rainbow crosswalk at Kal Beach in Coldstream “very upsetting.”

“For whatever reason, this person has chosen to leave a gesture of hate on a crosswalk that stands for the exact opposite. I’m disappointed that such an act has occurred as the message of the rainbow crosswalk is to cultivate kindness, respect and inclusion. Ultimately these acts show us that there continues to be a need for these symbols in our community,” she said.

The rainbow crosswalk at Kal Beach in Coldstream has been vandalized yet again.

White paint was poured on the crosswalk and witnesses told Castanet the paint was still wet Saturday morning, indicating the crime occurred sometime over night.

The brightly coloured crosswalk was installed in 2017 as a sign of inclusion for the LGBTQI+ community.

Police investigated the matter, but no charges were ever filed.

In September 2017, the rainbow crosswalk in downtown Vernon was also vandalized, with the word 'Queer' spray painted on it.