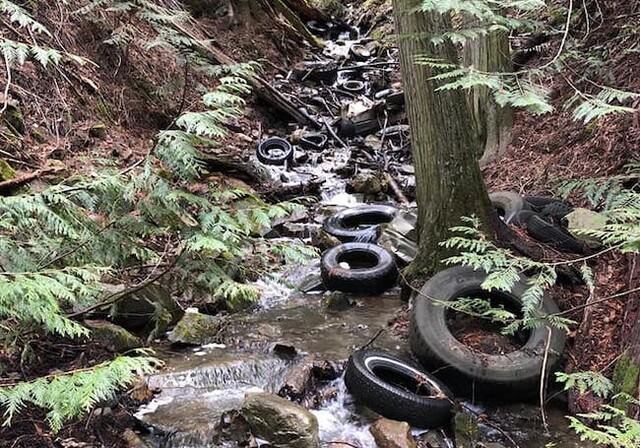 Dozens of old tires have been discovered dumped in a creek south of Vernon.

Kane Blake with the Okanagan Forest Task Force says the group is working with government agencies "to get the OK so we can remove tons of tires from it."

"Because of the impact that has already happened, we need to work with the agencies to have the proper steps taken.... If things go as planned, we will be able to remove them this summer.

In a post on the OFTF Facebook page, Blake says it's not known how the tires got there, as the stream is in a remote area, not accessible by vehicle.

The dump site was discovered by a group of hikers, who sent Blake the photos. He's working on getting an exact GPS location for the spot, and in the spring will walk the creek to see how bad the situation is.

"There are tires as far as you can see," he said Friday.

"How they got there, we will never know. What we do know is this group can make a difference and have it all clean so our wildlife can have clean drinking water," he wrote on the Facebook post.

While Blake didn't disclose the exact location, he said the dump site is between Vernon and Lake Country.

He says he's attempting to organize a helicopter to help in the cleanup.

"This way, we can make bundles and have them hauled out to an open area. This is not accessible by vehicle and is roughly a 10-minute hike in on foot."

The post has already garnered dozens of comments and offers of help.