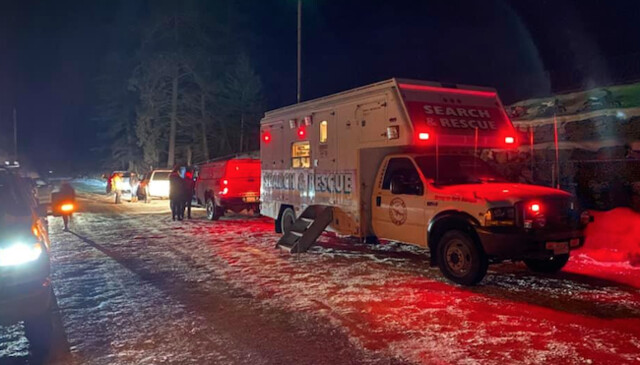 The drama began near Becker Lake in Lavington when multiple vehicles became stuck along the twisty mountain road.

RCMP enlisted the aid of VSAR, and with temperatures quickly dropping overnight, the urgency of reaching the people was increasing.

An incident command post with VSAR and RCMP members was established at the Noble Canyon turnoff from Highway 6, and the VSAR team deployed snowmobiles and UTV vehicles to make their way up the mountain.

“As the scene began to unfold, it was discovered that a number of teens in different vehicles had driven up the icy road earlier in the day, and had become hopelessly stuck at several locations,” said a post on the VSAR Facebook page. “They called friends to help get them, who then became stuck themselves on their way to assist. Then, a number of parents were called to assist, only to become stuck as well.”

As the temperature fell, the difficult, icy road conditions worsened and one by one, search and rescue members came across immobile vehicles strung along the mountain road.

A relay system was created to shuttle the subjects down the mountain, as there was only a single lane available.

By 1 a.m., 15 people were transported down the mountain to warmth and safety.