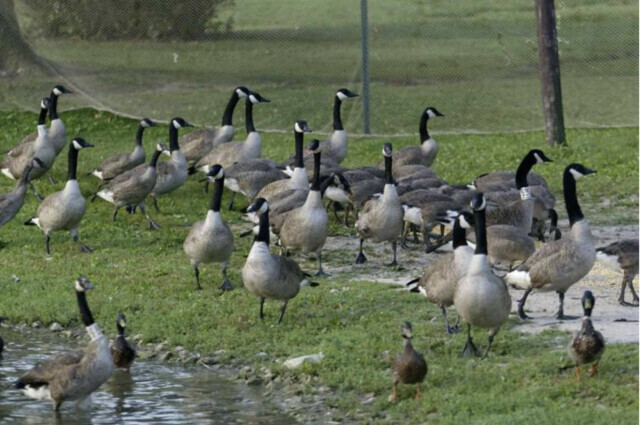 A second petition has been launched to stop the City of Vernon from going ahead with a goose cull.

Peyton Romeril has also started a petition to convince Vernon city council to reverse its position on the cull.

"This is happening because of the growing complaints that there is too much goose poop on local beaches and parks, such as Kin Beach, Polson Park and Paddlewheel Park," says Romeril.

Romeril says the local parks "are considered home to these geese."

As of midday Monday, the petition had garnered 384 signatures.

Meanwhile, Amanda Peterson, who launched a separate petition, says she just doesn't believe it's right to kill the birds, despite complaints of them fouling beaches and parks.

"They have other options ... machines, repellants, dogs. We are the only city that is doing this."

A local woman has launched a petition to stop the planned killing of Canada geese in Vernon.

Amanda Peterson launched her "Save the Geese in Vernon" change.org campaign over the weekend.

It's in response to the City of Vernon authorizing a $41,000 cull of the resident geese following complaints of the birds fouling parks and beaches with their droppings.

"This does not save our beaches," says Peterson. "This is wrong! We need to take care of our beaches, which means maintenance.

"Stop the cull and buy maintenance machines. This is ethical and moral."

Peterson said equipment used in other parts of the country could be used here.

"Our city needs to have higher standards for our wildlife... Please help me save our wildlife and use our money more wisely."

As of mid-morning Monday, 65 people had signed the petition.

Vernon has been a member of the Okanagan Valley Goose Management Program since 1995, and began egg addling, or shaking, in 2007 to reduce goose numbers. The program has not been enough to stop growth in the non-migratory goose population, however.