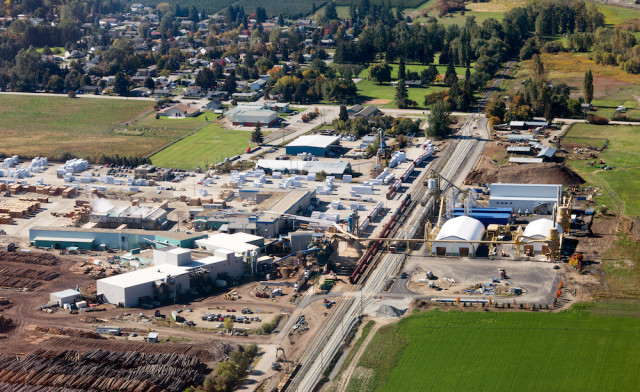 While 2020 was a challenging year for one of the Okanagan's largest corporate employers, Vernon-based Tolko Industries says it is well positioned as the new year unfolds.

In an exclusive interview with Castanet News, CEO Brad Thorlakson says "there was no playbook" for the effects of the COVID-19 pandemic on the lumber industry.

"It was a really difficult year for industry ... there was significant contraction in the first quarter. With COVID hanging over us, there was no playbook, just a lot of uncertainty."

But, Thorlakson said Tolko has "never had better safety performance in the history of the company" than during COVID.

"Our No. 1 priority is to make sure we protect the health and safety of our people," he added.

With sawmills, plywood, pellet and OSB mills across Western Canada and partnerships in the United States, Tolko employs about 2,700 people in Canada and another 350 in the U.S. Its B.C. operations include mills in Armstrong, Lumby, Lavington, Heffley Creek, Lake Country, and Williams Lake.

In the U.S., Tolko has partnerships in Louisiana, Alabama and Mississippi.

Mid-year, the company saw a surge in demand that has continued across the industry.

"None of us expected people at home, not working, would start using so much wood," Thorlakson said of the pandemic home renovation boom.

"We saw good momentum through the back half of the year."

The price of all building materials has increased significantly due to that demand, he says.

"We don't anticipate prices staying at these levels," says Thorlakson. "They should get back to normal this year."

Thanks to Tolko's international connections, Thorlakson says his contacts in China "told us what to expect" and the company formed a pandemic response team in March. Technology meant almost 95% of office and sales staff were able to work from home and still do.

"We'll be running the company virtually for the foreseeable future," he said.

"Fortunately, we were able to keep all our operations running at full capacity throughout."

Thorlakson said all employees who must come in to work, fill out an app questionnaire every day before coming in ... "we're being very cautious."

"People are settling in to the COVID rhythm," he said.

Looking forward, Thorlkason said Tolko's focus will be on product and geographic diversification, and he is looking toward more joint ventures in Alberta and the U.S.

"We're looking for growth on both sides of the border."

Tolko's markets are mostly international, with about 70% of its lumber going to the U.S., 20% staying in Canada, and 10% to Asia, including China, Japan, Korea, Taiwan and the Philippines.

"I think the work we did prior to the pandemic put us in a good situation," Thorlakson said.

As for the seemingly never-ending softwood lumber squabble with the U.S., he said during the company's 65 years, it has gone through five rounds of softwood battles.

"There are no ongoing discussions ... we anticipate a resolution, but it will take some time.

"The latest review dropped our duties to 8.99%, so we have seen some improvement," he said.

Thorlakson said he is proud of how the company and its staff "have pulled together to get through this stressful period."

He's "cautiously optimistic" about the year ahead. "U.S. housing is still strong, but there's still lots of risk in the medium term," he said.

"Long term, our plan is to remain a B.C.-based company headquartered in Vernon."