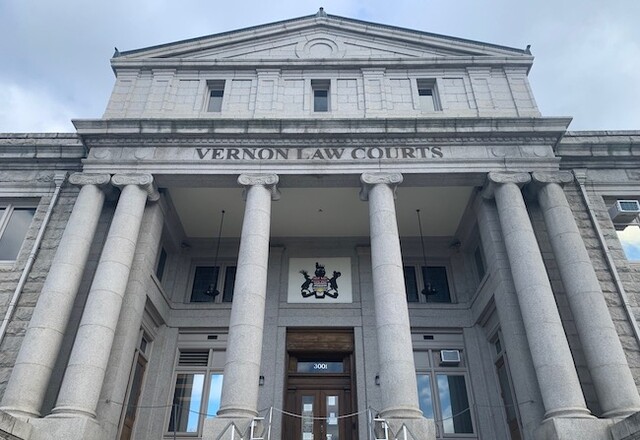 A man charged with firing a gun at police near Falkland has pleaded guilty to a lesser charge.

Darwyn Allen Curtis Sellars had been charged with attempted murder after firing at three RCMP officers on Dec. 2, 2019. On Monday, he pleaded guilty to the reduced charge of discharging a prohibited firearm with intent to harm or prevent arrest.

The tense chase and shootout played out between Falkland and Westwold, and closed Highway 97A for several hours.

Communications counsel Dan McLaughlin with the BC Prosecution Service says Sellars pleaded guilty on several charges and had all matters adjourned to Tuesday at 2 p.m. to fix a date for sentencing.

Sellars also pleaded guilty to flight from police and dangerous operation of a motor vehicle as well as possession of a firearm contrary to an order.

As well, he also pleaded guilty to break and enter related to a charge out of Merritt, and probation breaches and driving while prohibited charges out of Williams Lake and Abbotsford.

The gunfire followed after police were called about a suspicious vehicle in the Falkland area.

The vehicle evaded roadblocks, and shots were fired as it fled from police. Officers used a spike belt to stop the vehicle, which came to rest in a field.

Witnesses at the time reported hearing as many as 19 shots.

In December, Sellars' passenger, Jennifer Singleton, pleaded guilty to a single charge of being in a vehicle knowing a prohibited firearm was in it.

She received a conditional discharge with 12 months probation and a 10-year firearm prohibition.