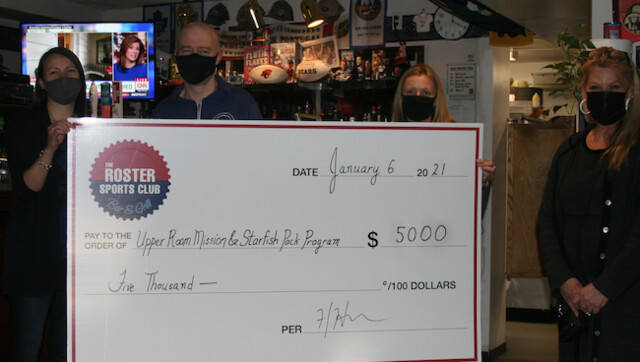 Photo: Contributed
The Roster Sports Club and Grill?s Dish Out the Kindness fundraiser raised $5,000 that will be split between the Upper Room Mission and Kalamalka Starfish Pack Program.

A Vernon bar sports club has served up a significant donation for two Vernon agencies.

The Roster Sports Club and Grill’s Dish Out the Kindness fundraiser raised $5,000 that will be split between the Upper Room Mission and Kalamalka Starfish Pack Program.

The Roster fundraiser involved donating $5 from each $50 gift certificate and regular-price entre?e purchased for dine in or take out Saturday through Wednesday throughout December.

“We knew the $5,000 goal was a big one due to restaurant sales being down, but really felt as hard as restaurants have been hit due to the pandemic, we knew many charities would be hit even harder this year and wanted to do our part,” said owner Hussein Hollands.

Since it began operating more than four decades ago, the URM has served thousands of meals and clothe those in need and the donation will help the mission to continue to help others.

“Our mission is to feed and clothe the homeless, seniors, as well as low-income people that may just need help for a little while,” said Naomi Rouck, URM general manager. “As the Upper Room Mission relies on donations from the community, we are so grateful to The Roster for the generous $2,500 donation, which translates to 1,428 meals.”

“When it comes to the weekend, they don’t have the food they need. Starfish Packs was designed to change that,” said Krista Blankley co-chairperson of the Kalamalka Starfish Society Pack Program. “One pack costs $575 to feed one child for a school year. The $2,500 funds from The Roster will go a long way and feed four children over 34 weekends – and are we are so appreciative for the support.”