Vernon's 'Suicide Hill' will be getting a name change

Suicide Hill to be renamed 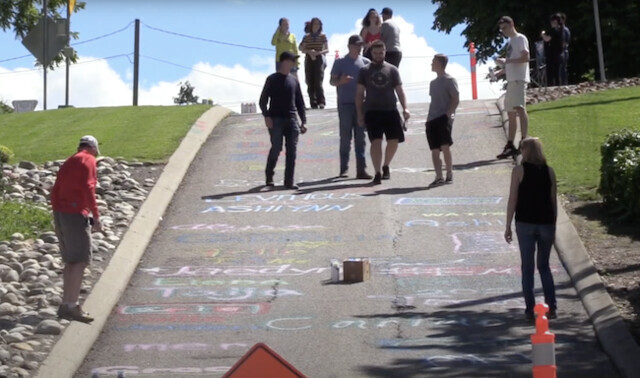 After a plea was made by a local father, Vernon's Suicide Hill will be getting a name change.

Vernon council voted to remove the name 'Suicide Hill' from all city literature, and will be actively seeking a replacement name.

"This hill is named after the significant hazards on this stretch of road to motor vehicles," said Mund. "We shouldn't be the ones to decide on the name, but it needs to be changed."

The hill earned its nickname from its double humps that thrill-riders used to take on when the road was open to both uphill and downhill traffic. Over the years there were a number of crashes on that stretch, and then the hill was subsequently closed to two-way traffic.

The hill came back into relevance this summer when Vernon Secondary School students were allowed to spray paint the road for their graduation. Sherman Dahl, a local businessman, sent a letter to Castanet explaining why the name of the hill should be changed.

"The notion of doing things silly enough like racing down a hill at a speed high enough to potentially kill yourself and then naming it 'Suicide Hill' is nothing short of pure ignorance," said Dahl. "We are not sure what Vernon should call the well-known landmark – but we certainly know what it should NOT be called."

For the time being, the City of Vernon will reference it as '30th Avenue Hill' while the naming process is ongoing.