OKIB member creating a stir with his popular bannock 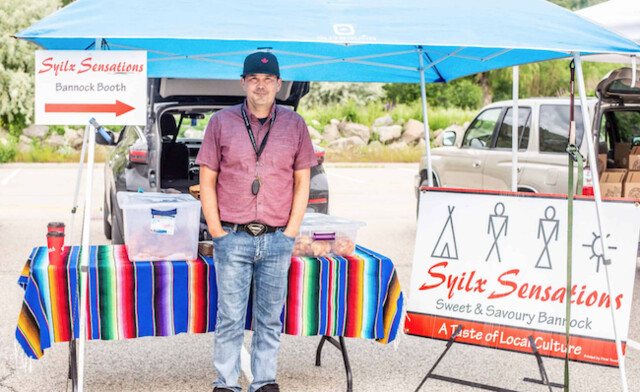 Photo: Kelsie Kilawna
Shane Miller is creating a sensation with his popular bannock.

Shane Miller is creating a bit of a "sensation" at the Vernon Farmers' Market.

Miller is the owner of Syilx Sensations, a fast-growing catering company that specializes in bannock – a golden fried bread popular in Indigenous communities.

Miller is currently the only Indigenous owned and operated vendor at the farmers' market, and he is fast making a name for himself.

“I let the bannock speak for itself. If you have a good product then people will come back,” he said while manning a booth at the market in the Kal Tire Place parking lot.

But the road to success has been a bumpy one.

He says Syilx Sensations is about more than just his food. He wants to “give a positive message of who we are” while also “trying to build a foundation for the family, and that’s the most important thing to me.”

The young man was also diagnosed with non-cancerous tumours that put him out of work and it was then that he decided it was time for a change.

“I wanted to be a carpenter… but I found out that trying to lift over my head among doing other things, it’s just not the same as it used to be,” he told Indiginews.

“So you have to fall back on your next set of skills, and that happened to be cooking for me.”

And those cooking skills are creating a stir.

“His bannock is very popular, and people are always looking for him,” says Ingrid Baron, manager at the Vernon Farmers’ Market.

Miller had to cut his farmers' market attendance short last year due to a car accident, and Baron said his bannock was missed.

But he is back this year and selling bannock at the market gives him a chance to talk about his Syilx roots.

Miller started his business with help from the 2018 Enterprize Challenge hosted by Community Futures. He then opened his business in Okanagan Indian Band land.

- with files from Indiginews