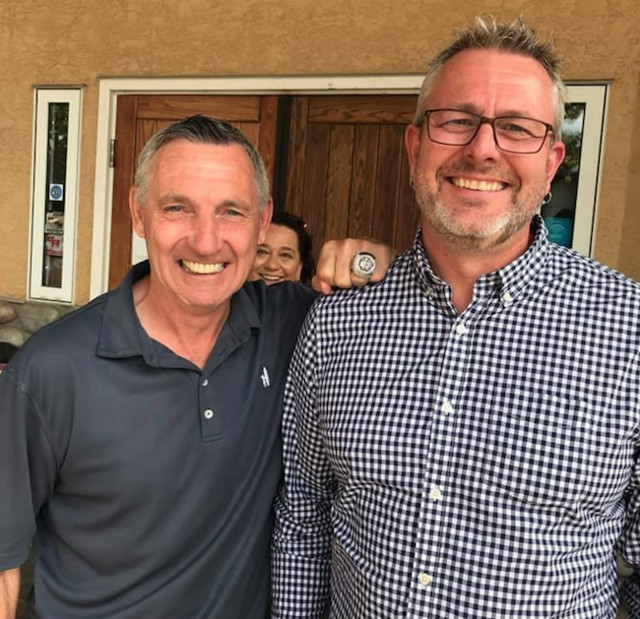 It's not every day you get to lace up with a living legend.

But that is exactly what a group of Vernon rec league hockey players got to do when Denis Savard put on the blades and hit the ice.

Local resident Art Corrigan knows someone who is personal friends with Savard.

Savard had been to Vancouver while playing in the NHL, but had never been to the Okanagan. He accepted an invitation from his friend to visit, and Corrigan met Savard at a luncheon.

One thing led to another, and Wednesday evening the Stanley Cup winner took to the Okanagan Training Rink for a friendly game of Canada's favourite sport.

The players call themselves the Piranhas, and Savard split his time between the two benches.

He even did his trademark spin-a-rama on a breakaway, to the delight of everyone in the arena.

“Almost the entire ice surface stopped playing as he skated in and did his signature spin on the goalie and scored,” said Corrigan, adding not only did Savard play a full game with them, he spent a great deal of time signing autographs.

Friends and family of the players were invited to come out and watch and even get pictures with Savard's Stanley Cup ring.

Savard also took the time to pose for an individual picture with every player on the ice.

“It was incredible. In fact, every one of these pictures are going to be sent to Denis, and he is going to sign them all and return them to myself to give to each person on the team. He is an ambassador for the Chicago Blackhawks.”

The Quebec native played 1,196 games in the NHL, collecting 473 goals and 865 assists. Five times during his career, he scored at least 100 points and for seven straight years he had at least 30 goals.

Savard was elected to the Hockey Hall of Fame in 2000 and in 2017, was named one of the 100 Greatest NHL Players in history.

During his career, Savard played for the Chicago Blackhawks, Montreal Canadiens and Tampa Bay Lightning.