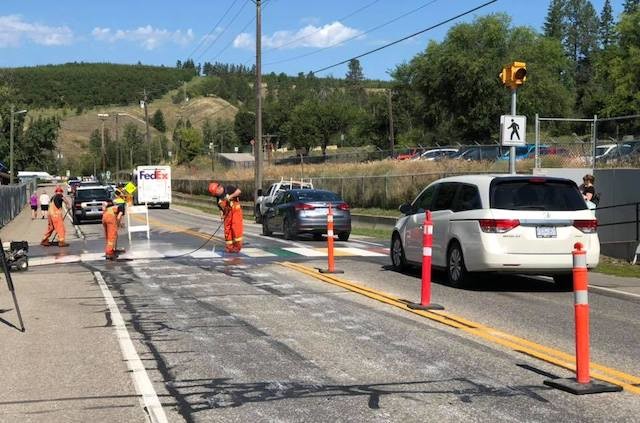 The suspect wanted in connection with the vandalism of the rainbow crosswalk at Kal Lake beach in Coldstream may have left behind fingerprints on a paint can lid.

Castanet reported Sunday morning that a paint can lid with white paint was seen near the fence at the crosswalk, but it's not confirmed if that is the item that was recovered for testing.

RCMP were alerted to damage at the crosswalk after a vehicle drove through wet paint, RCMP said in a release.

RCMP believe the paint was applied to the rainbow crosswalk between midnight and 1:45 a.m. Sunday,

"Investigators are working with our Integrated Forensic Identification Section to determine whether the item has any evidentiary value," Finn added.

Anyone with information regarding this incident is urged to contact Const Louis Morrison of the Vernon North Okanagan RCMP, remain anonymous by calling Crime Stoppers at 1-800-222-8477 or leaving a tip online at www.nokscrimestoppers.com.

The District of Coldstream issued an update this afternoon on the crosswalk vandalism.

"The RCMP were alerted to the vandalism and are currently investigating the incident. Anyone with any information about the person responsible are encouraged to contact the RCMP at 250-545-7171," they said,

"District of Coldstream crews were on site earlier today to fix the damage to the crosswalk by removing the white paint. With this work completed, the crosswalk has effectively been restored to the condition that was in existence prior to the vandalism. The crosswalk will undergo some additional warranty maintenance work in the very near future."

The rainbow crosswalk at Kalamalka Beach was installed in 2017 at a total cost of $11,100, the district noted. This project was funded from the District of Coldstream budget.

A day after vandals attempted to paint over the colours of the rainbow crosswalk at Kal Lake beach in Coldstream, city crews were busy power-washing the paint from the surface.

They had most of the white paint removed by mid-morning.

There is no word if RCMP are investigating the vandalism.

When contacted by Castanet News on Sunday, Coldstream mayor Jim Garlick said he was saddened by the vandalism and frustrated that a symbol of inclusion can stir hatred.

"It saddens me to see that there are still individuals in our midst that are so insecure and threatened by this gesture of inclusion that they feel the need to sneak out to vandalize and deface it," Garlick said.

Garlick encouraged any witnesses to this act to contact the RCMP with any information they can provide. 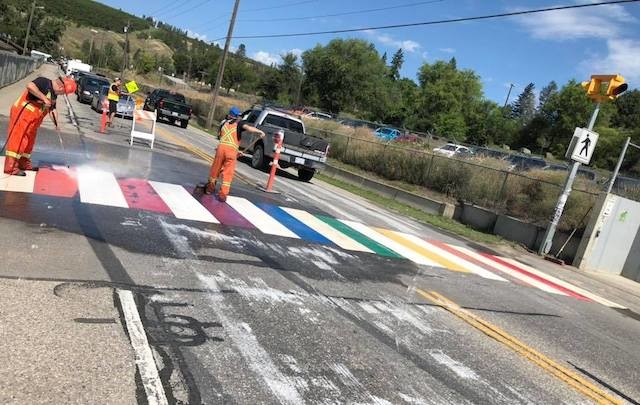