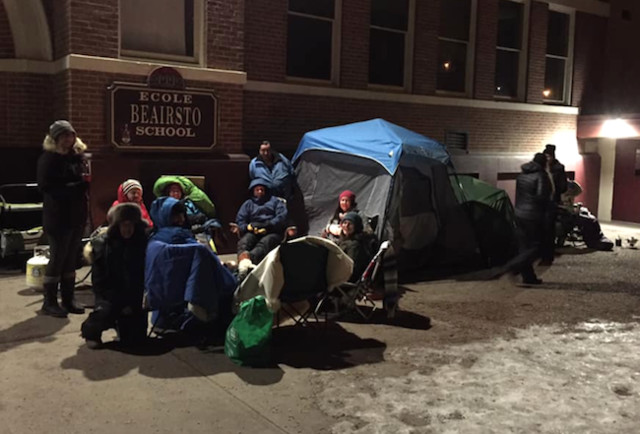 More than 90 parents camped out in front of Beairsto Elementary School this week, hoping to register their child for the French immersion program.

Maritza Reilly, communications co-ordinator with School District 22, said there are 88 available spots including eight for Grade 1.

The district fills the slots on a first-come, first-serve basis.

“The board has looked at other options such as online, but not everyone has a computer, or a reliable computer or fast Internet speed. We have also considered the lottery system which some other schools are doing, but we feel this is the most fair way for families to register,” said Reilly.

But just because there are more students registered in January than there are open spaces does not mean students will go without.

Reilly said typically not all students who are registered in January attend the program in September making room for children on the waiting list.

Vernon isn't the only school district where demand is exceeding program capacity, forcing some school districts to raffle off limited French immersion spots.

It is estimated more than 200 students will soon be on waiting lists across British Columbia.

"No child should be turned away from this popular life-changing educational experience. That's the bottom line," said Glyn Lewis, Canadian Parents for French BC & YK executive director.

"We call on all school districts to sit down with educators and parents to map out a strategy for growth. It is simply unacceptable for some children to be enriched and for others to be turned away in our public education system. These school districts need to do better. They need to open more French immersion classrooms to meet the demand."