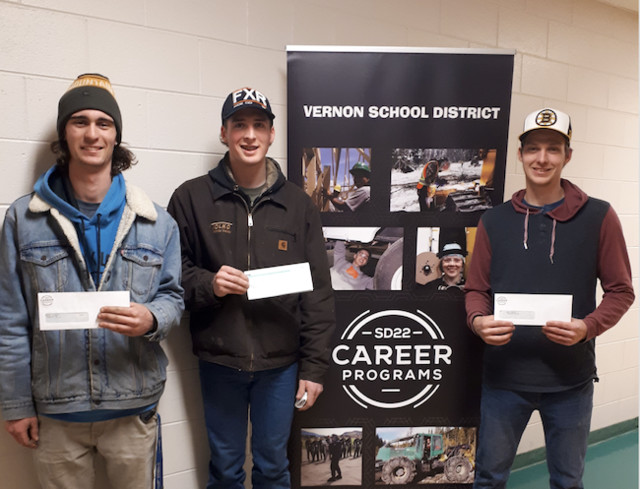 Thanks to the School District 22 Youth Work in Trades Program, four young men are on a path to a brighter future.

When Nick Peters, Jeremy Leary, Rowan Wood and Ian Augustin started the program, they didn’t know what to expect, but through the encouragement of career co-ordinators, they found their passion - and a career.

Students in the program receive work-based training of a trade apprenticeship while still in high school. They earn credits towards their high school diploma, log 480 training hours toward their trade credential and have the potential to win a $1000 award.

Peters had aspirations of becoming a mechanic in grades none and 10, but as the years passed, he realized that wasn’t the trade he wanted to build a career in.

“Working with the career co-ordinator at my school was a great experience and so helpful,” Peters said.

He took his trades training in plumbing and has already had a lot of great opportunities. He is currently working for Fox & Sons Plumbing with a goal of attaining his required hours and ticket.

Leary decided to focus on welding after spending a couple summers welding with his uncle.

“It was a great opportunity to do something I’ve always enjoyed doing, so I jumped right on it,” Leary said.

Leary’s future plans include finishing off the last level of his apprenticeship, progressing in the trade and eventually becoming a millwright.

Wood didn’t put a lot of thought into his career after graduating. It was actually during some extra curricular activities where he met someone who introduced him to framing.

With that introduction, Wood joined the Youth Work in Trades Program and started on his journey as a framer. When asked what his advice to others would be, he said “Start thinking about a career in trades early. There are so many great job opportunities.”