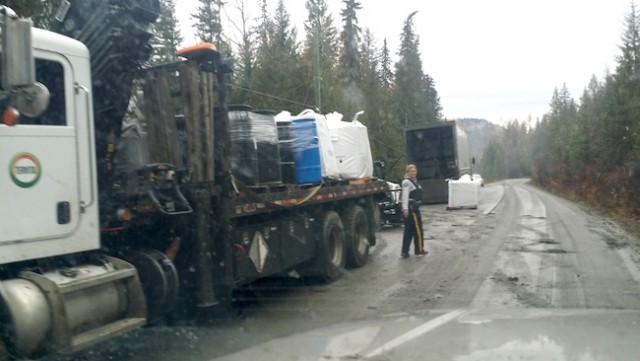 Photo: Contributed
RCMP have been hauling truckloads of items from a house on Trinity Valley Road.

Little information is being released on what some are saying is a massive meth lab on Trinity Valley Road.

Castanet received tips of a large police presence in the rural area earlier this month, but officials have yet to provide comment.

A witness, who asked to remain anonymous, said truckloads of chemicals have been going out of the property for a week.

“They had an ambulance on standby because of the toxicity of the chemicals that they are dealing with,” said the eye witness.

The house is at the 29 kilometre mark of the rural road.

“Neighbours are wondering why we haven't heard anything in the news,” he said.

The man said police are telling people in the area it is a “big meth lab bust” but they are not saying anything to the media.

Vernon RCMP Const. Kelly Brett said there are no safety concerns for the public and it is an ongoing investigation.

The man said police busted a meth lab in the same area several years ago.

In 2014, RCMP were called to a home in the Trinity Valley Area following a report of shots fired in the area where they discovered a drug lab.