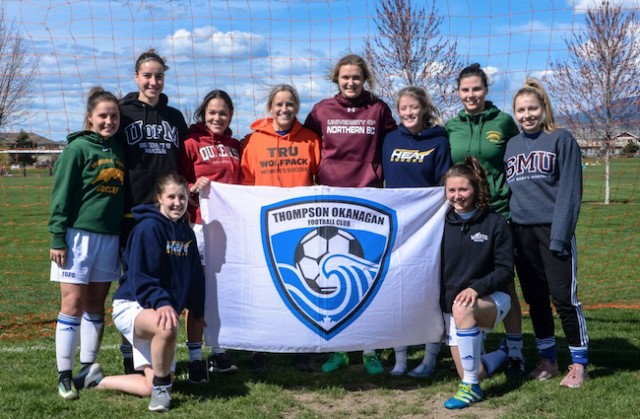 Photo: Contributed
A group of North Okanagan soccer players will be dispersing across the country as 10 players from one team were awarded post-secondary scholarships.

A group of North Okanagan soccer players will be dispersing across the country as 10 players from one team were awarded post-secondary scholarships.

Coach Jason Thompson called it an “unbelievable feat. It's a testament to them.”

The Thompson Okanagan Football Club (TOFC)is one of eight founding clubs in the BC Soccer Premier League. Six other clubs are based in the Lower Mainland and the eighth is from Vancouver Island.

“It's the highest level of youth soccer they can play in British Columbia,” said Thompson. “They are at the top of so-called top of the food chain.”

Thompson said the club has sent numerous players on to universities and colleges over the years.

“This is the biggest graduating class from one team that we've ever had in the club's history,” said Thompson of the TOFC 2000 Girls team.

Thompson said the young ladies may not have been at the top of the league standings, but they “have developed very well and are being recognized for that development. It's a development league and we are trying to get players to the next level. It's not about the result necessarily, but the development of the player.”

Kai Tolpinrud, TOFC executive director, said TOFC has one boys andone girls team at the U13 to U18 age levels.

“Evaluations are held each year to select players from Rep teams from each Thompson Okanagan soccer district and beyond. The top players from the districts are selected to form our teams.  We have players from Penticton, West Kelowna, Kelowna, Vernon, Merritt, Kamloops, Salmon Arm, Revelstoke, the Kootenays, Prince George and even the Yukon,” said Tolpinrud, adding the last two girls on the 2000 Girls team are also in talks with post secondary institutions.

“The BCSPL is the highest level of youth soccer in BC.  Its teams are the only place that the Provincial High Performance Program selects its players from.  The league is also the main feeder the the Vancouver Whitecaps Residency Program as well as the Women'd Elite REX National Program.  The BCSPL also is one of the most scouted leagues in Canada for Canadian and US Colleges and Universities,” he said.

The players are (school signed for and home town)