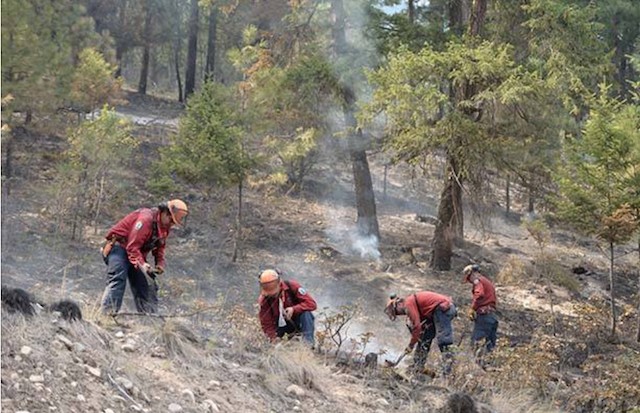 Photo: Ken White
A BC Wildfire crew puts out hot spots at the Martin Mountain fire.

RCMP are looking into why a residence caught fire in Monte Lake on the same day as a wildfire started.

The mobile home on the 4000 block of Paxton Valley Road caught fire on Monday, a few hours before a small wildfire began at the south end of Monte Lake, according to a resident.

Police have confirmed that an investigation is underway but have not said the residential fire was suspicious in nature.

"On July 31, the Vernon-North Okanagan RCMP in Armstrong attended to a house fire in the 4000 block of Paxton Valley Road," said an RCMP statement released Wednesday. "RCMP officers and local fire services attended to the fire. The house was not occupied at the time but is lived in.

"RCMP investigators remain on the scene and are continuing their investigation into the cause of the fire."

The BC Wildfire Service fire origin and cause team is looking into what caused two wildfires in Monte Lake. Both are believed to be human caused and there is a general belief among the public that the Martin Mountain fire, which started on July 26, was sparked by a cigarette butt thrown out of a vehicle window on Highway 97.

Firefighters who were on the containment lines of that first wildfire had to rush to the mobile home fire Monday in order to put it out using a water truck to blow open the front door, the resident said.

"The house fire started a few hours before the (second) wildfire down on the highway and fortunately the B.C. Wildfire Service crews working on the Martin Mountain fire...were able to respond with numerous water trucks and get it extinguished," said the resident who did not want to be named. "The RCMP have had a car sitting outside the home at the above address throughout the night since the occurrence to maintain the crime scene."