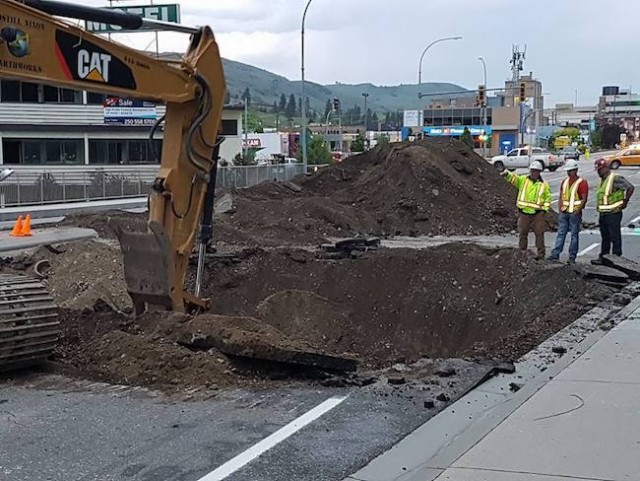 Photo: Dave Deshane
Crews are working on repairing a massive sinkhole in Vernon.

Crews worked overnight on the sinkhole that opened up underneath Highway 97 in Vernon, Tuesday.

One northbound lane of the highway was reopened just before 3 a.m., according to DriveBC, however, there is still a large mound of dirt on the highway and crews are continuing to work in the area so traffic is slowed.

The closure rerouted traffic around one of Vernon's major intersections at the bottom of Hospital Hill, where Highway 97 and Highway 6 meet, beside Polson Park.

A crew from the Transportation Ministry is on the scene of a massive sinkhole at the bottom of hospital hill that has closed all four lanes of Highway 97.

Heavy machinery has been used to tear up the pavement where the sinkhole appeared and a large mound of dirt is sitting on the road.

City Councillor Scott Anderson said the "provincial government is heading up this repair, which at this point involves a 15-foot-deep ditch and plans to go deeper. We're waiting in the wings in case MOTI needs help. It sounds like this is going to be a big deal."

A giant sinkhole has shut down Highway 97 in Vernon.

Both the south and northbound lanes were closed Tuesday afternoon near the intersection with 25th Avenue after a hole was spotted in the southbound lane.

Vernon Fire Rescue Cpt. Reinhard Mann said fire crews received a call about the four-foot-wide opening only to discover it was much more serious.

Mann estimates the sinkhole to be about 25 feet long, 15 feet wide and up to six feet deep under the surface of the roadway.

Vernon Creek exits Polson Park and goes under the highway where the washout occurred.

Mann said the extent of the sinkhole is not yet known, so all lanes of traffic were closed for safety reasons.

“I'm surprised there isn't a vehicle in there,” said Mann from the scene.

There is also a 30-inch pipe that has had the dirt completely washed away from it, leaving it suspended in mid air, but Mann did not know if it was a water main or sewer line.

Traffic quickly backed up in both directions as vehicles were rerouted along 34th Street.

Officials with the city and JPW Road and Bridge were examining the situation.