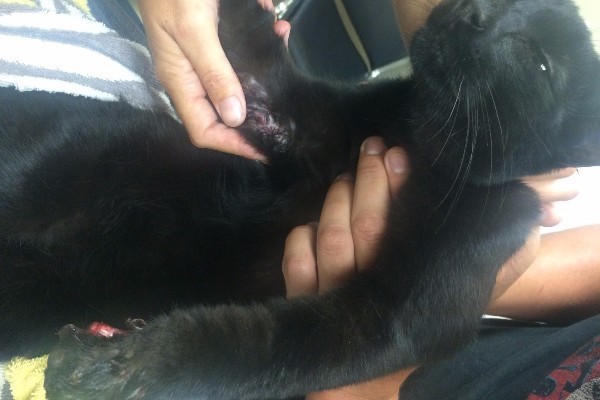 Alana Reinhardt said at around 3 p.m. Monday that Bruce was in surgery and has to have his leg removed at the shoulder.

The surgery will take several hours, but should be complete by the evening.

"There was nothing left of Bruce's paw," said Reinhardt. "It was horrifying. All the bones were shattered from his elbow down."

Reinhardt said Bruce fought hard to get out of the trap and make his way home, so she could not bring herself to put the eight-month-old cat down.

Bruce will spend the night at the vet's office and hopefully come home Tuesday.

Reinhardt said she is disturbed by the events.

"We're in a residential area," she said. "There are people all around us with pets. This was an old-fashioned leg-hold trap. That would do damage to anyone. If it was a kid, it would maim them."

Despite the darkness of the situation, Reinhardt said the support from the community has been a shining light.

"Everyone has been so supportive, it has restored by faith in humanity," she said.

Alana Reinhardt is appalled someone could be so cruel.

Her eight-month-old cat, Bruce, had to be rushed to a veterinarian for emergency surgery after getting his paw caught in some sort of trap over the weekend.

Reinhardt lives on Miller Street near the Legion in Lumby and early Sunday morning she heard her cat softly meowing from her yard.

Bruce was found lying in some bushes with a mutilated paw.

“He got his front paw and rear leg caught in a trap, pulled them out, and found his way home to us,” said Reinhardt online, adding having to pay more than $2,000 to have Bruce's paw amputated is not her main concern.

“What I am concerned about is what kind of possessed, disgusting human being is living among us in Lumby,” she said. “The vet said it was 100 per cent a trap due to the extent, nature and placement of his injuries.”

Reinhardt is offering a $100 reward for information on whoever set the trap. People are also being urged to call police or the SPCA cruelty line at 1-855-622-7722 if they have any information.

A Go Fund Me page has also been set up to help Reinhardt cover the cost of the amputation and follow up treatments for Bruce.