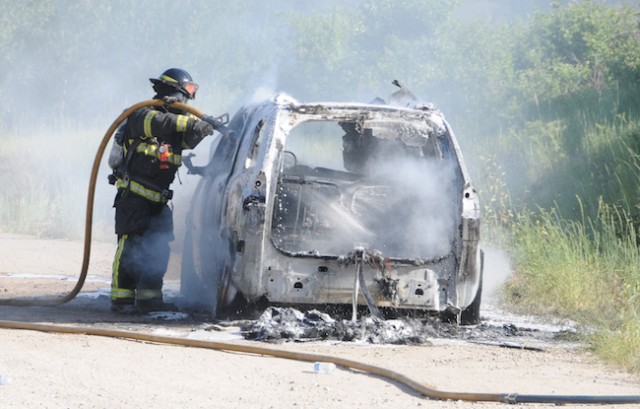 Vernon Fire Rescue was called to a car fire on Bailey Road Tuesday that had the potential to light the hillside on fire.

Although the fire was quickly doused once crews arrived, VFR Chief Darren Cecchini said the surrounding brush was a concern when crews first got the call.

“Thank God it was away from the grass,” said Cecchini from the scene. “He parked it in a good spot.”

“All of a sudden I saw smoke coming out of the back,” he said while fire crews finished mopping up the scene. “I sprayed some water on it, but it was getting a little too dangerous so I backed off.”

Bobbi Walch happened upon the scene when there was just a small fire under the vehicle.

“For some reason he went back in the car and we were yelling 'Get out of the car,'” Walch said. “We grabbed about 20 bottles of water and were handing them to him.”

But it soon became too dangerous to try and put out.

“We all walked away and it went poof,” she said. “Then the gas tank exploded. It was a big bang. There were a couple of big bangs.”

Cecchini said flames were shooting 10 feet into the air when crews arrived.

Fire crews ensured the car was completely out and the surrounding grass thoroughly soaked before handing the matter over to police.