Coldstream fire department has determined that the lumber mill fire was electrical in nature.

"There was a catastrophic failure in the fuse box in an older part of the building," said fire chief Shane Code. "It created a significant amount of arcing."

Due to the loss of a significant amount of product plus the loss of the kiln building itself, damage is estimated to be in the hundreds of thousands of dollars.

A coordinated effort between six fire departments and up to 40 firefighters assisted in dousing a blaze at Coldstream Lumber.

He says the fire is now in the overhaul phase as remaining crews are now pulling smoking rubble apart.

"We basically have to stay and make sure it's cold and extinguished. There will be a fire watch for at least the next 16 hours."

Code also acknowledged the assistance of Coldstream Lumber who assisted with forklifts and heavy equipment.

While the cause of the fire is still under investigation, Code says damage is in the hundreds of thousands of dollars.

He says a company official estimated they lost about 10 per cent of $1M plus in product at the mill on top of two buildings and two kilns.

Despite the product and property loss, Code says no one was hurt.

"It's mid August, we have an interface all around us with grass lands...we've got all this product in the yard. We have two adjacent structures, limited access, a train coming down the track someone had to manually stop.

Natural gas feed and electrical wires overhead. I'm happy. No one was hurt. It's a good day."

The blaze began just after 9 a.m. Tuesday morning and firefighters are having difficulty making any sort of progress against the scorching inferno.

Each of the buildings on fire had a large kiln inside, used for drying lumber. They are run on natural gas and could be what caused a loud explosion heard by multiple witnesses at the scene.

One employee was taken to hospital for smoke inlation, but so far no one has been injured as a result of the blaze.

Fire crews from Lumby, Coldstream, and the BX Swan Lake departments are all on scene, with at least two dozen members and nine fire trucks.

Castanet News reporter Carmen Weld says the fire is extremely intense and aggressive, and fire fighters have come out exhausted as they take their water breaks.

Crews have also begun fighting the blaze from multiple angles, including attacks from the rail tracks beside the lumberyard.

Other buildings on the property are also being threatened by the blaze and in some cases, the siding and signage is melting from the building.

There is no cause available at this time.

A massive fire is burning at Coldstream Lumber.

The blaze broke out around 9 a.m. this morning.

At least one witness tells Castanet they heard an explosion.

We’ll have more information once it becomes available. 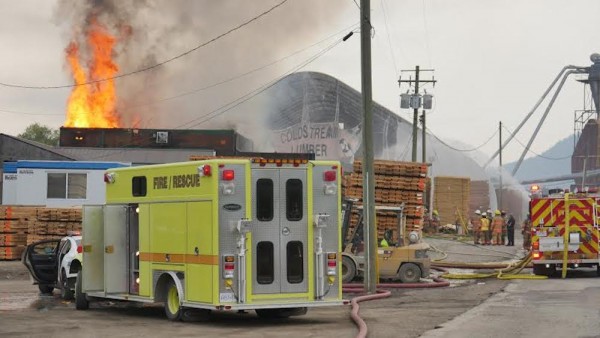