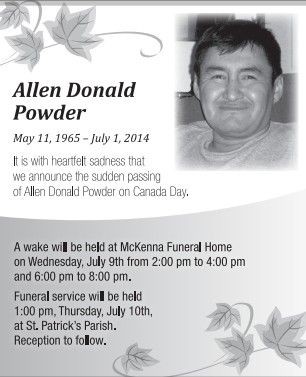 In an bizarre story out of Cherryville, Castanet news has learned that a man lost his life after being struck by a cow.

According to the Lumby RCMP and the BC Coroner the man was working on a cattle farm on Campbell Road in Cherryville corralling the herd, when a mother cow turned on him and struck him from behind.

The man was able to get up and climb over the fence and walk a few metres before he collapsed and died on the scene from internal injuries.

BC Coroner Barb McLintock says 49-year-old Allen Donald Powder, a First Nation man from Yellowknife, was in Cherryville for the summer working on the ranch, something he would do every year.

McClintock explains that on July 1 Powder, working with another farm hand and the ranch owner, was working on the field moving the herd when the tragic event occurred.

“They were in the process of separating mother cows and heifers, or younger cows, which can always be tricky. One of the older mother cows became aggressive and assertive towards the humans and she did not want to get separated,” explains McClintock.

She says the three men were able to chase her away and redirect her and then the cow turned on them.

“She charged at them and struck and ran over Mr. Powder.”

McClintock says the Coroner was able to confirm that he died from blunt force injuries to his abdomen from being struck by the cow.

This particular herd of cows was a 'horned breed' of cow and thus Powder was struck by her incredibly hard, but blunted horns, which contributed to his death. As the horns were shaved down and blunted, he was not pierced or gored.

Lumby RCMP were called to the scene that day and Cpl. Proce says it was a very bizarre and terrible accident.

He explains that unlike the cows you may be thinking of, these cows were apparently quite wild and had not had a lot of human interaction, spending the majority of their lives on the range.

“I think they had been on the range for several years, more or less fending for themselves, so they were a little cantankerous I suppose,” says Proce. “I don't think they were used to people to the degree that most cows and livestock are, and for some reason this one particular cow turned on this man with such degree that is cost him his life.”

Neither the BC Coroner nor the RCMP know what became of the cow or that herd.

A wake and funeral service was held for Powder in his home town of Yellowknife on July 9 and 10.