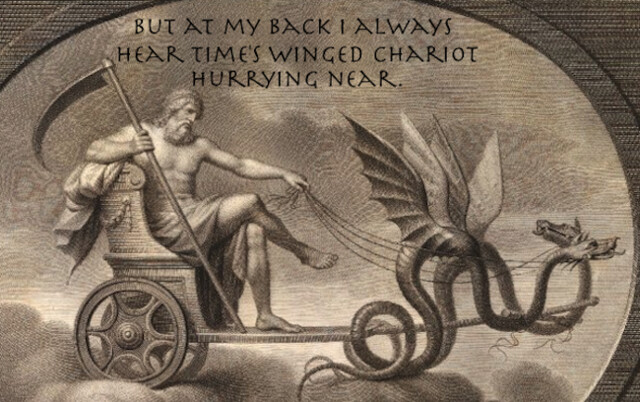 It is the best of times, it is the worst of times (with apologizes to Charles Dickens).

We’ve all looked at the clock with dread as we battled a deadline and willed the hands to slow down. We’ve all spent a night before someone we love leaves, fixing the clock with an evil eye, hoping the hands of time will take a coffee break.

We let the world outside control us and we respond, like puppets, to strings pulled by who we know not and dance to an unseen caller.

We can identity with Andrew Marvell as he sat at his desk in Elizabethan England and wrote: “Had we but world enough and time.”

Even thought it was written 400 years ago, it feels present, as if time had collapsed those four centuries into this moment.

To His Coy Mistress is not on many people’s reading list, but we’ve all identified with another line from the poem as we spilled our tea hurrying to a meeting or a presentation: “Time’s winged chariot hurrying near.”

We feel it at our back and think the horses in the chariot’s braces are galloping even more furiously than when we had more hair and less waist, but they’re cantering at a more leisurely pace.

Only a few billion years ago, the day was 10 hours. And contrary to what we think and feel, it’s getting longer as the moon’s pull drags on the Earth’s rotation.

We compensate for the planetary sloth by operating in the supersonic: we zip from one thing to the other without really touching down; we check out schedule on our cell in traffic — even though it’s against the  law — and race to where it tells us to go.

We’ve switched jailers from the one on our wrist to the one in our pocket, or on our belt.

We promise ourselves that tomorrow we’ll learn Spanish, go on that long vacation, take yoga, start meditating, slow down.

But in spite of our hurrying, the running from one thing to the next until we fall into bed exhausted, we know it doesn’t have to be this way. We can control time. We can bend it to our will.

The writers of The Talmud, that great fountain of knowledge from the Jewish tradition, knew that. “Who forces time is pushed back by time; who yields to time finds time on his side.”

We’re time’s willingly slave. We adopt a victim mentality that allows the digital slave master to dictate how we behave, and when.

“Your time is limited, so don't waste it living someone else's life. Don't be trapped by dogma — which is living with the results of other people's thinking,” said Steve Jobs, co-founder of Apple Inc.

“Don't let the noise of other's opinions drown out your own inner voice. And most important, have the courage to follow your heart and intuition. They somehow already know what you truly want to become. Everything else is secondary.”

There are about 745,000 hours in an average lifetime, but we dictate whether we want to be average. (The average 60 year old has a one per cent chance of increasing those hours to 876,000, to watching the clock tick pass the century mark.)

“Time goes by very fast,” Canadian Rockette Jeanette Heller was quoted in a Globe and Mail obit. “When I tuned around and was 95, I didn’t believe it myself.”

Seneca, the Roman Stoic philosopher, and Nero’s mentor, had a similar view almost 2,000 years ago.

”It is not that we have a short time to live,” he wrote in On the Shortness of Life, “but that we waste a lot of it. Life is long enough, and a sufficiently generous amount has been given to us for the highest achievements, if it is well invested.”

There are two kinds of time: chronos and kairos. We worship one and ignore the other, except when it grabs us in those moments of accidental reflection. One is nine to five, something outside us that we allow to dictate how we behave and how we feel inside.

The other covers the special times, the shining times, those times when we turn off our cell and ignore the clock on the wall, the time we spend in eternity.

Those are the times we get lost in the wonder, when we fall into the music of a great song, hug someone we love, are transfixed by a baby’s eyes. Time feels different then.

"(Kairos) signifies a time in between, a moment of undetermined period of time in which something special happens. What the special something is depends on who is using the word. While chronos is quantitative, kairos has a qualitative nature," says an article on Wikipedia.

“According to ancient Greeks, Kairos was the god of the fleeting moment, a favourable opportunity opposing the fate of man. The moment must be grasped; otherwise the moment is gone and cannot be re-captured.”

Kairos is a child at play or an artist at work: absorbed in the moment, unselfconscious. They’re immersed in eternity.

“In Our Town, after Emily has died in childbirth, (author) Thornton Wilder has her ask the Stage Manager if she can return home to relive just one day,” Madeleine L’Engle writes in Walking on Water.

“Reluctantly, he allows her to do so. And she is torn by the beauty of the ordinary, and by our lack of awareness of it. She cries out to her mother, ‘Mama, just look at me one minute as though you really saw me… it goes so fast we don’t have time to look at one another.’

“And she goes back to the graveyard and the quiet company of the others lying there, and she asks the Stage Manager ‘Do any human beings ever realize life while they live it?’ And he sighs and says, ‘No. The saints and poets, maybe. They do some.’”