Who wrote your life script? 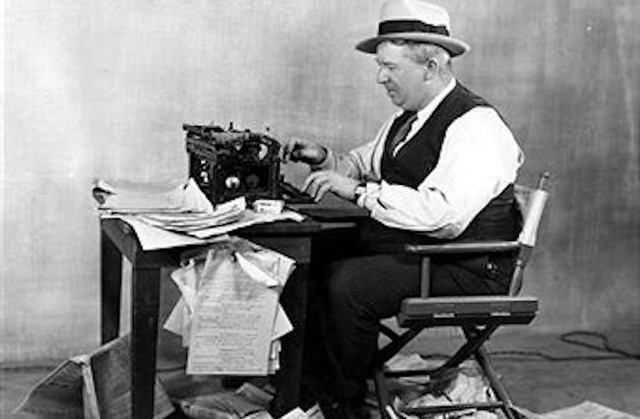 Hollywood scriptwriters are paid well to write movies we want to see.

We don’t get paid as well as those people who come with the great story and great lines, and we don’t get invited to parties with Brad, George and Angelina, but we’ve all written at least one script — the movie of our life.

And, just like the Academy Award winners, we have a lot of help with the script, often people we don’t acknowledge.

Parents, teachers, friends, relatives told us how we should behave, what we should do, who we should be. They suggested labels and beliefs that we wrote into the storyline.

Our script sets the direction of our life and tells us what we can or can’t do. It’s marked up, edited and re-written as we decided what we should do, what we couldn’t do and what we wouldn’t do. And some things we thought we could do, tried, failed and decided we would never do again.

Our grand epic — whether drama, comedy or tragedy — is still being filmed, but the script was written long ago. Every decision, every act, every choice changes us, but slight changes over 20 or 30 years can add up to a big transformation.

“The script of life that you are living builds on and draws its strength from certain cornerstones called fixed beliefs,” Dr. Phil McGraw writes in Self Matters. “Your fixed beliefs tell you what role you are playing. You have practised your script so much and for so long that the beliefs you have about you, about your possibilities, about your responsibilities, do in fact become fixed. They become set in stone.”

If we don’t rewrite the script, there’s little chance of growth because we already know what will happen, even if it’s unconsciously. If we have know we can’t do this, and aren’t good at that, we don’t even bother to try.

We choose a role, a method of thinking and acting, never considering playing against type.

We choose to typecast ourselves.

The body-mind is a feedback loop. A thought produces a reaction in the brain, which releases chemical signals that are transmitted to the body as thoughts. They produce chemicals in the body that allows our body to feel the way we’re thinking.

And around and around it goes, and where it stops, who know?

But if we have the same thoughts every day with the same reaction, we become human versions of a show that is always in syndication — nothing ever changes.

“It takes awareness and effort to break the cycle of a thinking process that has become unconscious,” writes Dr. Joe Dispenza in Evolve Your Brain. “First, we need to step out of our routine so we can look at our life, through contemplation and self-reflection we can become aware of our unconscious scripts.

“Then, we must observe these thoughts without responding to them, so that they no longer initiate the automatic chemical responses that produce habitual behaviours.”

We’re so accustomed to living from the script — even if we don’t know have one — that we’re uncomfortable if we’re forced to ad lib or improvise. We would never have accepted a guest spot on Drew Carey’s old show, What My Line Anyway?

Even when we have the opportunity to play a bigger role, we question our ability, skill and worth and are afraid to stretch. Granted, it’s not much fun being booed for what some consider a bad performance, but that’s how we learn.

Henry Fonda still suffered from stage fright at 75 and threw up before each performance, but he didn’t let his fear hold him back. He won an Oscar and is considered one of the greatest actors of all time.

Can we toss away the script and jump in the flow of life?

If we can’t, we can at least re-write the script and, instead of playing second banana, move up to a starring role; stop playing the straight man and go for the laughs. Dean Martin shone brighter after leaving Jerry Lewis’s shadow.

“Mind is cause, and experience is effect; and so long as your mind remains unchanged, it will continue to produce just those effects or experiences of which you are anxious to be rid,” wrote Matthew Fox.

“If you do not like the experience or the effect that you are getting, the obvious remedy is to alter the cause and then the effect will naturally alter, too.”

Quantum physics says everything, is possibility until we make a choice. As many philosophers, priest and pundits have proclaimed, all we have to do to change our life right now is change our mind – and our script — and keep it changed.

A life lived consciously will have problems and pain, but that’s a better than playing a minor role until the director yells cut and wondering, as did a character in an episode of Law and Order: Criminal Intent: “What happened to my life?”