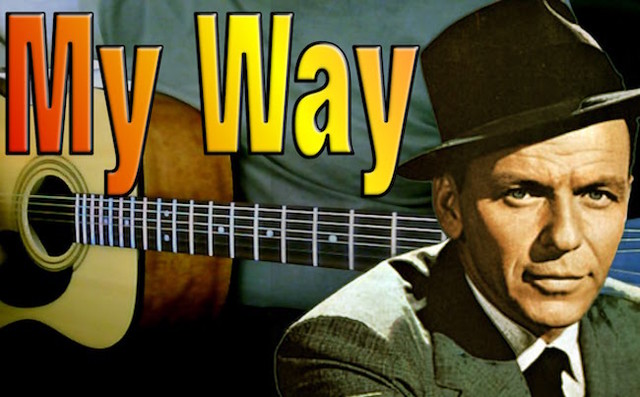 “Regrets, I’ve had a few, but, then again, too few to mention,” Frank Sinatra warbled in I Did It My Way, a song written by Paul Anka from the perspective of Ol’ Blue Eyes, who was about to retire.

Yes, there were times, I’m sure you knew
When I bit off more than I could chew
But through it all, when there was doubt
I ate it up and spit it out.

Anka wrote the song in one night, employing the diction and cadence that Sinatra, who talked like a Mafia “wise guy,” would use.

But whether the sentiments came from Anka or Sinatra, there is a lot of wisdom in the words and music. Most people have too many regrets and don’t spit then out. Instead, we masticate them over and over, ruminators instead of a terminators.

Rumination comes from the Latin word ruminare, which means to chew the cud, regurgitating and re-chewing partially digested food.

The mental version of rumination is much the same, although there are two parts:

Reflection is a positive attribute; brooding its black opposite. Most of us are dilettantes at reflection, but masters at brooding, at ripping, shredding and dissecting.

Who has not obsessed over some perceived slight or injustice; something we should have done or said;  not done or said; or we plan to do or say?

We regret not going to more of our kids’ Christmas plays and summer soccer games, we feel guilty about not calling and visiting our parents more often, we deeply regret and feel guilty that we forgot our anniversary, again.

And in the upcoming festive season of peace, brotherhood and goodwill, there will be more rumination than usual as we get together with friends and family, or elbow our way through the mall, a place we haven’t ventured since last Christmas.

In a study entitled Regret Resolution, Aging, and Adapting to Loss, the authors wrote: “Both theory and empirical evidence suggest that people who have unresolved regrets experience lower levels of well-being than do those who resolve their regrets.”

One of the authors, Susan Nolen-Hoeksema, then a psychology professor of psychology at Yale University, came up with response styles theory 20 years ago.

“Whereas the original response styles focuses on the relationship between rumination and depression, evidence now suggests that rumination is also associated with other psychopathologies, including anxiety, binge eating, binge drinking and self harm,” Nolen-Hoeksema and Blair E. Wisco wrote in Rethinking Rumination.

If wearing a groove into our gray matter with the same obsessive thoughts, and talking about the same negative things with friends, family and co-workers isn’t bad enough, there’s more.

“Rumination can be oddly irresistible, and can steal an hour of your attention before you even realize that you’re obsessing again,” Elisabeth Scott wrote in How Rumination Affects Your Life.

“In addition to dividing your attention, however, rumination has several negative effects: stress; negative frame of mind; less proactive behaviour; self sabotage; and hypertension.”

To be human is to obsess, starting during the morning shower, but we don’t turn it off with the water. We can have up to 50,000 thoughts a day, often the same ones we had yesterday, many revolving around a central grudge or regret, like planets circling the sun.

How do we overcome our morbid tendency to obsess about our perceived weakness, foibles and those of others? The answer is in the near legend about Carnegie Hall: A New Yorker (or in some versions Arthur Rubinstein) is approached in the street, and asked, “Pardon me sir, but how do I get to Carnegie Hall?”

If Google is any indication, both regret and guilt are popular topics; it says it has 108 million pages on guilt; 368 million about regret. There’s even one that tells us how to overcome serious regrets, and another has a survey that will compare our results with others who did the survey.

Many people recommend mindfulness as a way to stop ruminating. On Google, there are 170 million pages about mindfulness, including a session with Jon Kabat-Zinn, founding director of the Stress Reduction Clinic and the Center for Mindfulness in Medicine at the University of Massachusetts Medical School.

He’s one of the reigning experts and his book, Wherever You go, There You Are is great, as are two books by Eckhart Tolle: The Power of Now, and A New Earth.

It comes down to consciousness and awareness: if we don’t get lost in the endless loop of beating ourselves up for what we did and didn’t do, we can stay present for each moment of each day. And when we stray, and we will, we come back, again and again.

It’s practice, but what else do we have to do? If we’re going to be thinking, we can strive to choose what we think. Unlike Neo in the Matrix no one will offer us a pill to pull us into reality, although the pharmaceutical industry is making a large fortune selling pills that ease the anxiety that comes with guilt and regret.

If Anka had added another verse, Sinatra would have told us, in his wise guy way, that neither regret nor guilt are real; they’re states of mind, thoughts, phantoms we have created and could exorcise if we chose.

I’ve loved, I've laughed and cried
I've had my fill, my share of losing
And now, as tears subside, I find it all so amusing
To think I did all that
And may I say, not in a shy way,
Oh, no, oh, no, not me, I did it my way.