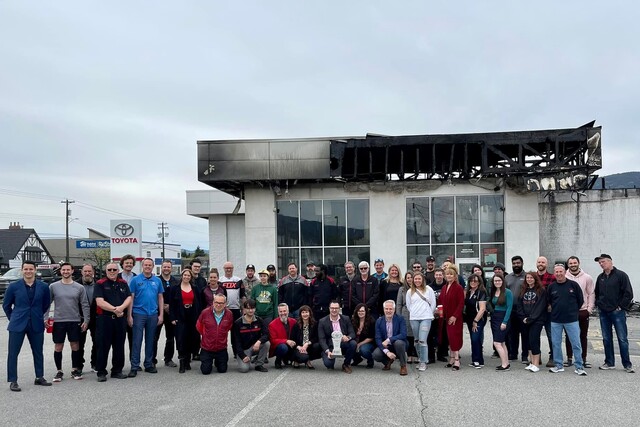 The picture says it all.

The proud employees of Penticton Toyota are standing in front of their burnt dealership, posing with their President’s Award that they captured for the fifth year in a row.

The image is a perfect illustration that the Penticton Toyota team is resilient, strong, hard-working and committed. And although the path over the next while will be a challenge, they are up for it.

The Penticton Toyota building suffered seven-figure-dollar damage when it was allegedly set on fire early on May 11. The dealership will continue to conduct business in an unaffected building on its property, but it has been forced to move its service area to another part of town.

Penticton Toyota will use its new used vehicle facility as its new headquarters. The 6,000 square-foot facility was constructed just last year after the business acquired an acre of land to the south of its original property and expanded.

"There is only one way to move, and that’s forward," general manager Larry Pidperyhora Jr. says. "This event will only make us closer as a team and motivate us even more to deliver the best service. The support we have received from the community has been overwhelming, and we are so grateful to have many friends and supporters to help us through this challenge.”

The fact that the Toyota dealer keeps winning the President’s Award shows that it will make this new situation work and will continue to put its clients first.

“It is because of the culture we have built with our staff and our customers that contributes to us winning this award," Pidperyhora Jr. says. "We have an ongoing commitment to excellence in serving our customers to the highest level.”

The President’s Award, after all, is the culmination of a dealer’s efforts in all areas of the dealership, including parts, service, new vehicles, used vehicles and customer satisfaction. The President’s Award is one of the highest honours a Toyota dealer can achieve, and the fact Penticton Toyota keeps winning it year after year speaks volumes.

The company knew it had won the President’s Award before the fire, but it was not presented with the hardware until after the devastating event. That made for a most unusual celebratory photo.

Penticton Toyota is unique in that it is a singularly owned dealership and not part of a dealer group. Larry Pidperyhora Sr., who has been with the business for three decades, is at the dealership nearly every single day, giving the business that small-town feel where everyone is welcome.

More information about Penticton Toyota can be found here.